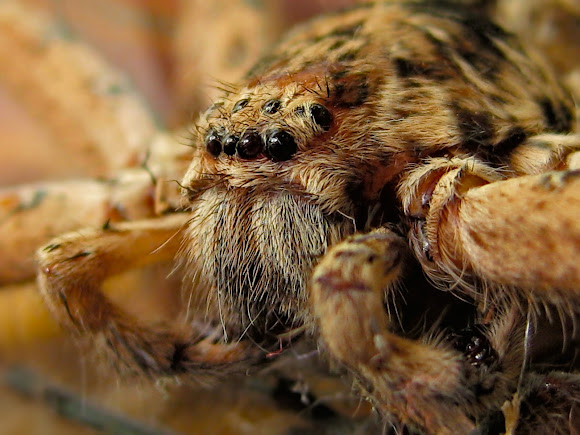 The Brown Huntsman is a large spider patterned in brown and black. It has crab-like legs, and is fast moving. These spiders have eight small eyes, two rows of four across the front of their thorax. They feed on insects and are particularly fond of cockroaches and grasshoppers. Huntsman are quite shy and are harmless to humans, but bites usually result only in mild local pain and swelling should one be bitten. They can grown up to about 15cms across the legs, which is roughly a handspan.

Houses, forested areas, gardens, rainforest. Found under loose bark on trees, in crevices on rock walls and in logs, under rocks and slabs of bark on the ground.

This fellow lived in my laundry for a few weeks, and even though I'm fascinated with (and frightened of) spiders, this was my first really close look. He wasn't big by Huntsman standards which probably gave me some nerve, but it's really hard to take clear macro shots when your hands are shaking! I was stunned to see him so hairy. It was so beautiful, like a hairy pet. About a week after I took these photos, I found him dead. His little body was sunken and shriveled, and I felt so sad. The last photo in this series shows the large spines on the legs. I really like the colour of the photo, but you'll notice the legs curled under. Life and death is natures way.

Thanks, Brian. The video was amazing. I like spiders and am not phased by huntsmans. However, I think a colony of 200 spiders might even freak me out. I'd rather know them on a one-on-one basis.

Amazing spotting Neil!! Check out this article, which mentions there are 95 species of huntsman spiders that are only found in Australia. http://theconversation.com/hidden-housem...

It blew me away to see how woolly these guys really are. He needs a damn good shave. Awesome critters.

This guy needs a hair cut!

I wish I did. Had my favourite pics of various portfolios burnt to disc, but the rest died in the flood. Floods and dead hard drives seem to be a common theme in my life. Never mind. I've just got to wait for the next huntsman, and then....

Fantastic shots! Just so furry. Got any of the whole critter.?