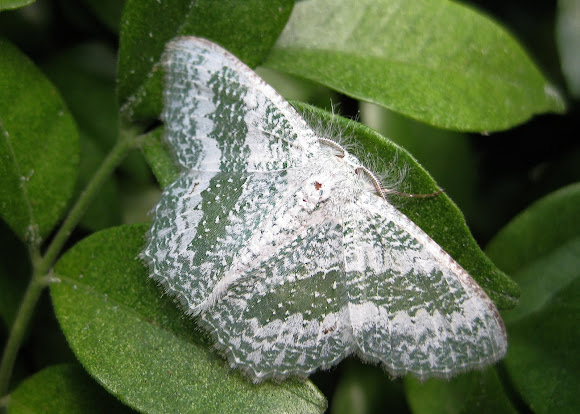 Bizarre Looper Moths are members of the Geometridae family. They have a wingspan of 25-30mm. Males and females are very different: males are green with a white pattern. Females are translucent green with brown borders. They may be distinguished from other species in this genus as the hind wings have scalloped edges. The Bizarre Looper gets its name from the strange appearance of the caterpillars. Caterpillars feed on Avocado, Acacia, Roses, Macadamia Nuts.

This moth was found on a hedge of Murraya paniculata, commonly called Orange Jessamine. It was roughly the same size as a Murraya leaf. Range is usually in Northern half of Australia.

This was the first time I ever looked at a moth in really close detail. Macro photography is good for that kind of thing, although a pocket camera can only do so much, particularly when it's hand-held... by me :-/ I was surprised to see that the body and wings were so 'scaley', the wings also very fine and lace-like in appearance. I've often watched moths and butterflies negotiate their way through mazes of spider webs, but is it any wonder they rarely get caught. With such a loose surface, it would be very difficult for a web to get a good hold on these guys.

Just a little bit of editing. Until I knew what the moth actually was, I nick-named it the 'ghost'. I was disappointed with the original images when they were taken, but they've grown on me since then. Now, I actually prefer them more than the edited version. Still looks spooky though :-)

Wow! That third photo is really cool! How did you get that photo?

I'm now on the look-out for more moths, J. Thanks for the info and explaining Lepidoptera. The first thing I noticed when I took this photo were the scales. Now I know why. Never to old to learn something new. Neil :-)

Gorgeous! Thank you for adding this to my mission, "Moths of the World!" I love to hear about people's first experiences looking at moths up close. They are such delicate, beautiful creatures. Moths, as well as butterflies, have a scaly appearance due to scales which make up the color of the wings. Otherwise, the moth would have a plastic-like appearance and would be clear. In fact, the taxonomic order moths and butterflies belong to is Lepidoptera, which means "scale-winged."

Absolutely, Kerry. It is like lace. Hard to tell from the photos, but to look in macro through the lens, the fine lace-like quality was obvious.

Thank you very much, Nuwan, for the species ID. You are right on the money with this one. I appreciate you help :-)

Whatever it is it is very pretty, like lace almost!