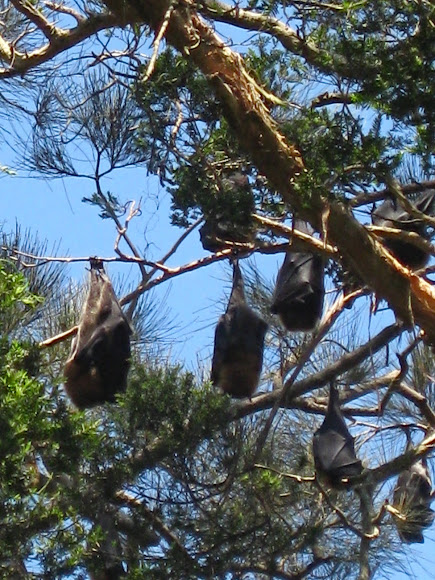 The Grey-headed Flying-Fox is one of the largest bats in the world with a weight of 600–1000 g and a head-body length of 230–289 mm. It is endemic to the south-eastern forested areas of Australia, principally east of the Great Dividing Range. The species shares the continent with three other members of the genus Pteropus: the little red flying fox, the spectacled flying fox, and the black flying fox.

The Grey-headed Flying Fox requires foraging resources and roosting sites. It is a canopy-feeding frugivore and nectarivore, which utilises vegetation communities including rainforests, open forests, closed and open woodlands, Melaleuca swamps and Banksia woodlands. It also feeds on commercial fruit crops and on introduced tree species in urban areas. The primary food source is blossom from Eucalyptus and related genera but in some areas it also utilises a wide range of rainforest fruits. Lack of foraging resources can also force Grey-headed Flying Foxes into commercial fruit crops, increasing conflict with growers and subsequent culling of individuals. Loss of roosting habitat has also been identified as a threat to this species.

Grey-headed Flying Foxes roosting in a Casuarina tree, in a large colony at North Avoca on the NSW Central Coast. In NSW, this species was listed as vulnerable under the Threatened Species Conservation Act 1995. PS: The last photo in this series - both animals to the left of the frame are males; their genitalia are visible. It's not difficult to sex Flying Foxes. The same colony 18 months later (July 2013) - http://www.projectnoah.org/spottings/360...

The bat cave's location is no secret - Just follow your nose! Batman should have realised that.