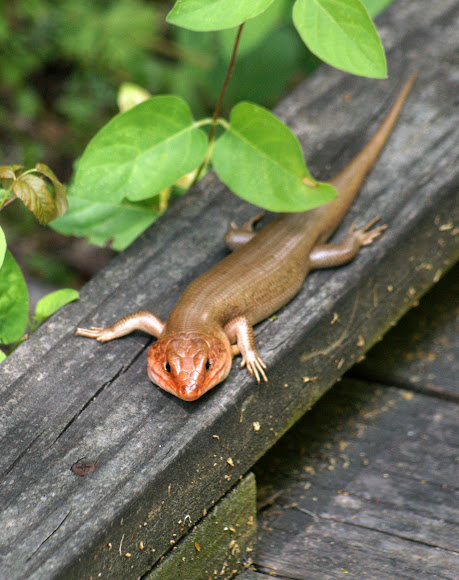 The broad-headed skink is a species of lizard, endemic to North America. Together with the Great Plains skink it is the largest of the "Eumeces skinks", growing to a total length of 15 centimetres to nearly 43 centimetres. These large lizards have short legs and a streamlined body. The body is generally gray, brown, or black, in background color with five white or yellowish stripes (two on each side and one down the center of the back). However, adults often fade to uniform gray or brown, and mature males develop enlarged orange heads with powerful jaws. Like other skinks, the young have a bright blue tails and prominent stripes. Although adult male broadhead skinks are unmistakable, females and immature lizards are very similar in appearance to five-lined and southeastern five-lined skinks. Thus, small skinks are best identified by close examination of the scales: broadhead skinks have an enlarged row of scales under the tail and five labial (along the upper lip between the nose and eye) scales.

This species may be found in many habitats but prefers wooded areas and are often seen in spreading live oak trees in maritime forests. This one was photographed at the edge of a swamp at the Phinizy Swamp Nature Park near Augusta (Richmond County), GA.

Although they may be found both on the ground and in trees, broadhead skinks, particularly large males, are more arboreal (tree-dwelling) than any of the other southeastern skinks. Adults are often seen high up in trees, sunning on exposed branches, while young are common on fallen trees and under bark or other debris. When pursued, broadhead skinks generally run for the nearest tree or log and can be quite difficult to capture. Like many other lizards, broadhead skinks will break off their tails when restrained, distracting the predator and allowing the lizard to escape. Broadhead skinks prey on a wide variety of insects, spiders, and other invertebrates. Large adults have powerful jaws, allowing them to overpower virtually any invertebrate and probably the occasional other lizard or small mammal.