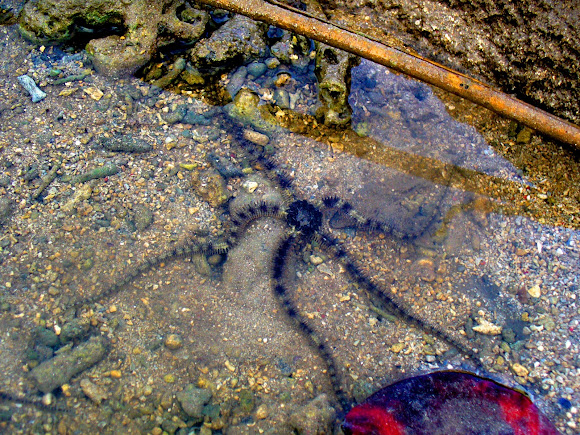 Brittle stars or ophiuroids are echinoderms in the class Ophiuroidea closely related to starfish. They crawl across the seafloor using their flexible arms for locomotion. The ophiuroids generally have five long slender, whip-like arms which may reach up to 60 centimetres (24 in) in length on the largest specimens. They are also known as serpent stars.

Ophiuroids can be found today in all of the major marine provinces, from the poles to the tropics. In fact, crinoids, holothurians, and ophiuroids live at depths from 16–35 m, all over the world. Ophiuroids are known even from abyssal (>6000 m) depths. However brittle stars are also common, if cryptic, members of reef communities, where they hide under rocks and even within other living organisms. A few ophiuroid species can even tolerate brackish water, an ability otherwise almost unknown among echinoderms. A brittle star's skeleton is made up of embedded ossicles.

I met on the beach when low tide, thank you

Nice series. Didn't know that some can survive in brackish water--very cool!