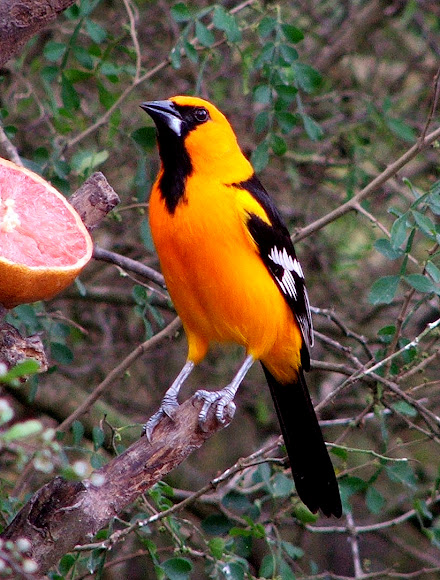 Both males and females have a black mandible and throat, as well as a black back and long black tail. Wings are black, but the remiges and rectrices (flight feathers) are fringed with white. These form a single white wing bar and white wing spots when folded. The secondary coverts form orange epaulets. The underside is almost uniformly orange or yellowish-orange. In general, immature specimens have an olive back, and a dull yellow on its head and its body. The first-year bird is similar to the adult, but it has an olive, not black, back, and yellow-olive tail. —Wikipedia

The Altamira oriole (Icterus gularis) is a New World oriole. The bird is widespread in subtropical lowlands of the Mexican Gulf Coast and northern Central America, the Pacific coast and inland. They have since spread to southern Texas, but this was not until 1939.[2] At 25 cm (9.8 in) and 56 g (2.0 oz), this is the largest oriole in Icterus genus. The bird nests in open woodland, with the nest being a very long woven pouch, attached to the end of a horizontal tree branch, sometimes to telephone wires. These birds are permanent residents, and unlike the migratory orioles that breed in the US, the species is sexually monomorphic—both the males and the females have elaborate coloration and patterning.—Wikipedia

This bird forages high in trees, sometimes in the undergrowth. They mainly eat insects and berries.—Wikipedia