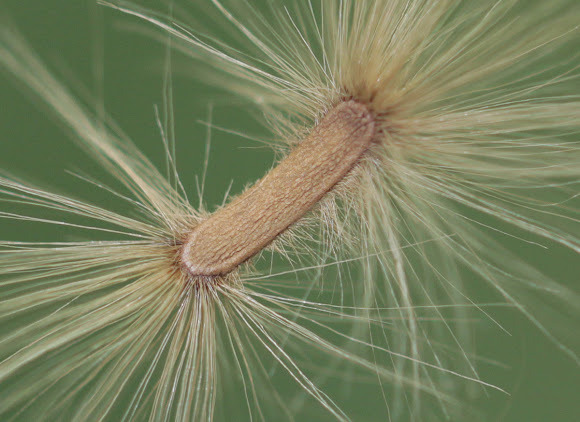 I thought this was one of the most bizarre and unique organism I spotted during my 4 months in SE Asia, only because of what my guide said about it. I probably would have walked right past it if it weren't for him pointing it out to me. Kind of looked like a seed from a distance and more like a caterpillar or larvae close up. According to my guide, he said they are rare to see and only move at night. It was certainly something I had not seen before, but he turned out to be wrong and it was nothing more than a simple seed. The 'body' was about 1cm with dandelion like hairs about 2cm long.

I spotted this with the help of a young local guide in the forest around Pungiton cave, near Pensiangan. I can't vouch for the knowledge of some local guides. He wasn't a biologist or naturalist, just a local farmer boy who knew the forest around the area he lived. As some have said, he must have mistaken this for a nocturnal caterpillar.

congrats on your SOTD dan and another congrats on the find, and a third congrats for getting an ID. My favorite comment here is ChiefRedEarth's: "It looks like a magnet & magnetic field. Believe it or not, i'm learning about magnets in school right now :) quite an educational spotting, thanks for sharing!

Thanks Karen, Antonio, Hema, Chief and Scott. Thanks for the kind and supportive words especially Mark and Leuba, maybe I'm being too hard on this spotting. I guess we've all learned a lot from it.

Congratulations Dan on SOTD. :)) To me this looks like a magnet with its magnetic field. :))
Very Interesting spotting!

Superb for the non existent Seed and Seed Pod mission.

Dan, I think you should be happy about generating so much interest in this unusual looking seed - I have certainly learnt something new. I should have checked origins of Adenium, before suggesting it as an ID. Also, got me thinking about seed dispersion and the benefits of having hairs at both ends, etc.
Nice close-up shot. Reminds me of sponge fingers ! ( with hairs)

Ha! You're not letting the community down at all Dan - crazy thought. I'm sure many of us have heaps of photos not knowing what the thing is. I was thinking the guides might have been more mischievous than ignorant as that's often been my guidely experience. Glad it's sorted out and we've learned something fascinating about seed designs. I would like to see more of this kind of thing. Far too underrated.

Great find Dan,fantastic and it's allways very nice to see the discussions arround a spotting,information is change between users and that is also a important goal of Project Noah,congrats on the SOTD and thanks for sharing your AWESOME spotting page :-)

I think I've come back from every trip with an organism the guides mis-identified. Glad it was found so quickly!

Mystery solved! Thanks Yasser for SOTD and thanks to the community for being as intrigued as I was. Thanks RahulUpadhyay for the actual ID. I appreciate all the comments and suggestions. Leuba, I agree it looks a lot like Adenium sp but they are not native to the area and although they are used a lot in cultivation, this was quite far from 'civilization'. So I wasn't sure about that one until Rahul, narrowed it down even more. I can't vouch for the knowledge of local guides and I suspended my disbelief to think this was some crazy insect I had never seen before. I've got wrong or misleading information from guides before, but I wanted to believe he was right on this one. I feel like I let the community down a bit on this one when it turned out to be just an usual seed.

In my eyes it must be a seed. Like others already commented, located between leaf and steam and only stabilized by these hairs it could not be an animal, which would be too heavy.

It sure looks like a seed to me. It has those "woody" complexion.
Don't believe in your guide too much. When I was your "guide" I made a lot of mistakes too. I think that guide might have mistaken it for a nocturnal caterpillar like this spotting nearby http://www.projectnoah.org/spottings/169... which can also suspend in mid air. Mealybugs and Scale bugs also look hairy and bald in the centre like that but they do not get caught between plants like your spotting as their "hairs" are too soft to support them.

Rahul, thanks for the correction. Your suggested genus appears to be a native of SE Asia as well, which is good.

Those guides must be more fun than a barrel of monkeys. http://growfoodslowfood.blogspot.com.au/...

Congratulations Dan on your SOTD

Congratulations, Dan! Hope the ID is right only a suggestion but it does look like a seed to me...especially, as in Pic 2, it appears to be caught between a leaf & stem.

Cool!!! Congrats on your SOTD...
Hope to you find what this is soon... Looks more like a seed to me, but it could be a cocoon, I guess.

Adenium obesum (Desert Rose) has seeds with tufts of fine hairs at either end. Check this Dan--
http://stiletto-hottie.blogspot.com.au/2...

Dan, we're really curious about this one. So curious, that we've made this Spotting of the Day to spread the word and see if someone out there might have some more information. Thanks for sharing this fascinating spotting and we look forward to learning more about it!