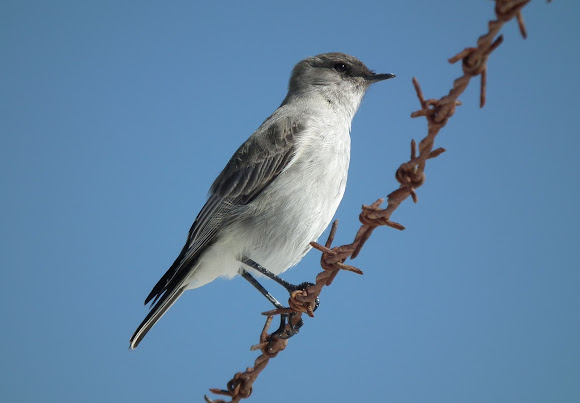 A common passerine in the Falklands, locally known as the News Bird (not sure where that comes from). They are short-lived birds, and as a result the populations vary highly from year to year. There is a subspecies specific to the Falklands that's bigger and darker than the birds found on mainland South America.

Found on open health land normally, this little bird was spotted on the beach at Yorke Bay, Falkland Islands

At Yorke Bay, you're not allowed to go into the water. There's a barbed wire fence with various warning signs about mines on it. While there aren't any mines buried on the beach, they still get things washing up on the shore and to take precautions, they section it off. I was sitting by this fence with some friends, taking pictures of the penguins, when this little guy landed almost right above me on the barbed wire! A very willing model.

Thank you all! Malcolm, thanks for that, that's really neat! I was scratching my head as to why it might be called News Bird. This guy was certainly happy to sit next to us on the beach!

Great series Laura.
The Dark-faced Ground Tyrant is called the "News Bird" from it's habit of hopping up to visitors as if it was about to have a chat.
Taken from the book Falklands and South Georgia Islands by Tony Wheeler.

Great images Laura so sharp! Always helps when you have a willing model : )