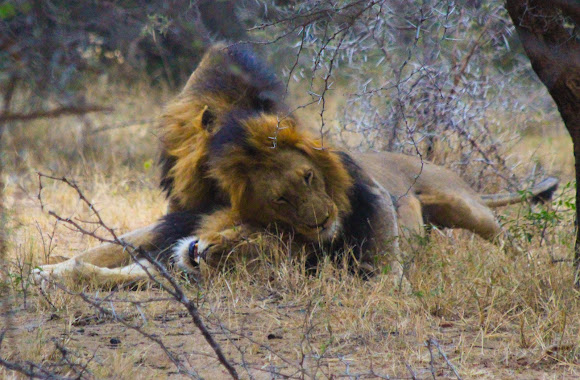 These three male lions are brothers and in this display they greet and assert dominance over each other. It is assumed the male on the ground is the least dominant of the three with the rank of each individual increasing with hight. In this way the male at the back standing tallest is the most dominant. In some cases as wierd or bad as it sounds, males will perform a fake matting stance on a less dominant male, not as an attempt at mating but yet another sign of dominance. Males do this in many other species on the african savannah.

The Majority of the wild lion populations of South Africa are within sanctaries and game reserves in the Northern half of the region.

A very cold and grey day in africa i am afraid and i had the ISO up high enough to get the shot but sadly the dark part of the manes are a bit fuzzy from 'noise' of ISO being to high.