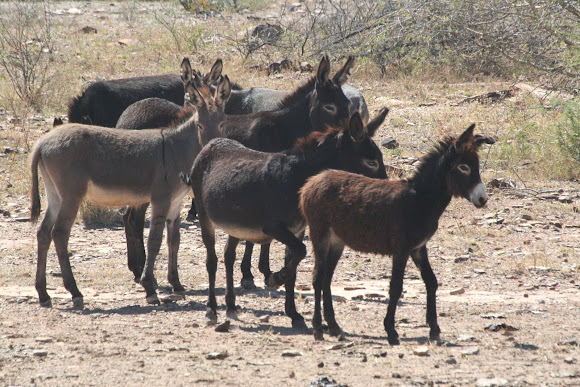 These are free-ranging domestic donkeys. The donkeys in this area are commonly light grey with a dark brown 'cross' on their withers or dark brown with a white nose. There are also some paler animals almost white often with a few sandy brown patches. This group were heading for water. Frequently one encounters small family groups of mother, yearling and new foal together.

semi arid savanna, by a temporary, natural pan or pond of water.

village donkeys roam freely throughout the communal grazing area associated with a community. When water becomes scarce they will head home to their owners kraal (pen) where they may be shut in for the night and then let out again to graze and forage in the morning. note the ear marks (notches cut in the margin of the ear lobes), these identify the owner of the donkey. Donkeys are commonly used as draft animals to pull small carts, sometimes saddled and less frequently these days used for ploughing. They are a common hazard on roads.