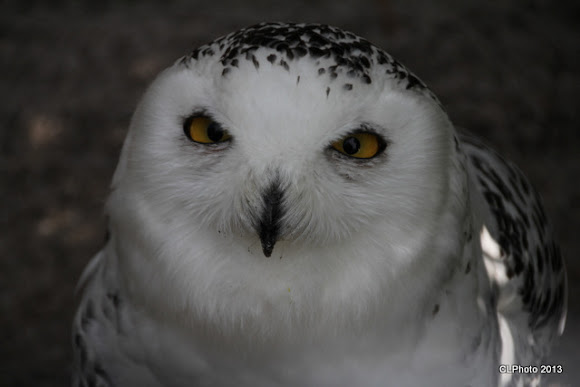 The Snowy Owl is a large, white owl with a rounded head and yellow eyes. The plumage ranges from all white (some old males) to white with many dark bars and spots (particularly in females and immatures). This is a bird of the open Arctic tundra of both the New World and Old World. Snowy Owls nest on the ground and feed mainly on lemmings, which they hunt both day and night (other mammals and birds are also eaten, as well as some fish and carrion). In winter, there is some movement south and individuals are seen at least irregularly south to the northern United States (and even, rarely, the Gulf Coast), Iceland, the British Isles, northern continental Europe, central Russia, northern China, and Sakhalin. These wandering winter birds are generally seen in open country such as prairie, marshes, fields, pastures, and sandy beaches. In years when lemming populations crash, many Snowy Owls move south to the northern tier of states in the United States and some go much farther. These wandering birds (usually heavily barred younger birds) often perch on the ground, low stumps, or buildings.

Wonderful look at this guy :)

Thanks anita1, SachindraUmesh and RiekoS.. I think it is a cute little face! :)