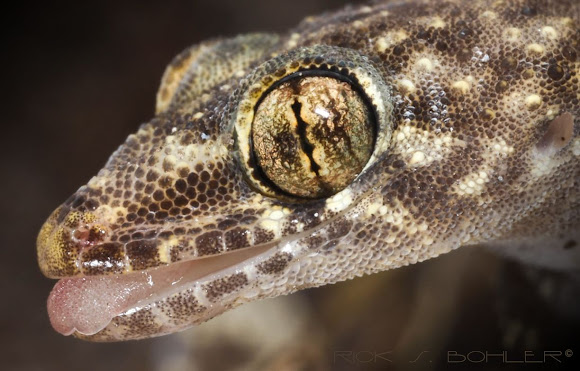 4 - 5 in (10 - 13 cm). Unlike any native lizard, geckos have sticky toe pads, vertical pupils, and their large eyes lack eyelids. Indo-pacific geckos are generally light gray or almost white in color but may have some darker mottling. This species is most easily distinguished from the similar indo-pacific gecko by its bumpy or warty skin.

As its name implies, the Mediterranean gecko is an old-world species that is common in Southern Europe and Northern Africa. It has been introduced in many tropical areas worldwide, including urban areas, in the Southeastern United States. This species has been widely introduced in Florida but its distribution is patchier than that of the Indo-Pacific gecko. It has also been reported to us from many metropolitan areas as well as few smaller towns, including Athens, Atlanta, Hazlehurst, Augusta, Savannah, Nahville, Coffee County, and Berrien County, GA; Aiken, Charleston, Columbia, Hanahan, and Pooler, SC; Montgomery and Birmingham, AL.; Lake Charles and New Orleans, LA; Houston, TX. In almost all areas, this species is associated with human development, and it is seldom found far from buildings with outdoor lights.

This species' adaptability has made it a very successful invader. It is unknown what impact the introduction of this and other species has and will have on native wildlife. Unlike most lizards, geckos are capable of vocalizing, often making squeaking or barking noises in territorial disputes or to deter a predator.

Though all your shots are incredible, this is one of my favorite series. Nice! :)

Thanks for the great compliment naross :)

Super-cool photos, Rick, and what an amazing gecko. Beautiful picture clarity. Thanks for the description too. A variety of gecko I've not seen before.