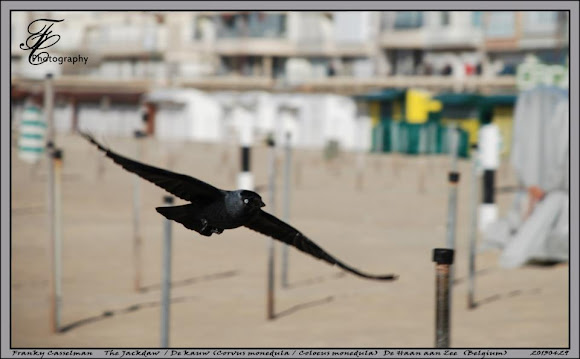 The Western Jackdaw is found from north-west Africa through all of Europe, except for the extreme north, and eastwards through central Asia to the eastern Himalayas and Lake Baikal. To the east, it occurs throughout Turkey, the Caucasus, Iran, Iraq, Afghanistan, Pakistan, and north-west India. However, it is regionally extinct in Malta and Tunisia. The range is vast, with an estimated global extent of between 1 million and 10 million square kilometres (4 hundred thousand to 4 million square miles). It has a large global population, with an estimated 15.6 to 45 million individuals in Europe alone. Censuses of bird populations in marginal uplands in Britain show that Western Jackdaws greatly increased in numbers between the 1970s and 2010, although this increase may be related to recovery from previous periods when they were regarded as pests. The UK population was estimated at 2.5 million individuals in 1998, up from 780,000 in 1970. A Western Jackdaw on Inisheer, Ireland Most populations are resident, but the northern and eastern populations are more migratory, relocating to wintering areas between September and November and returning between February and early May. Their range expands northwards into Russia to Siberia during summer, and retracts in winter. They are vagrants to the Faroe Islands, particularly in the winter and spring, and occasionally to Iceland. Elsewhere, Western Jackdaws congregate over winter in the Ural Valley in north-western Kazakhstan, the north Caspian, and the Tian Shan region of western China. They are winter visitors to the Quetta Valley in western Pakistan, and are winter vagrants to Lebanon, where they were first recorded in 1962. In Syria, they are winter vagrants and rare residents with some confirmed breeding taking place. The soemmerringii subspecies occurs in south-central Siberia and extreme north-west China and is accidental to Hokkaido, Japan. A small number of Western Jackdaws reached the north-east of North America in the 1980s and have been found from Atlantic Canada to Pennsylvania. They have also occurred as vagrants in Gibraltar, Mauritania, and Saint Pierre and Miquelon, and one is reported to have been seen in Egypt. Western Jackdaws inhabit wooded steppes, pastures, cultivated land, coastal cliffs, and towns. They thrive when forested areas are cleared and converted to fields and open areas. Habitats with a mix of large trees, buildings, and open ground are preferred; open fields are left to the Rook, and more wooded areas to the Eurasian Jay (Garrulus glandarius). Along with other corvids such as the Rook, Common Raven (Corvus corax), and Hooded Crow (C. cornix), some Western Jackdaws spend the winter in urban parks; populations measured in three urban parks in Warsaw show increases from October to December, possibly due to Western Jackdaws migrating there from areas further north. The same data from Warsaw, collected from 1977 to 2003, showed that the wintering Western Jackdaw population had increased four-fold. The cause of the increase is unknown, but a reduction in the number of Rooks may have benefited the species locally, or Rooks overwintering in Belarus may have caused Western Jackdaws to relocate to Warsaw. (from wikipedia)

Measuring 34–39 centimetres (13–15 in) in length, the Western Jackdaw is the second smallest member of the genus Corvus. Most of the plumage is a shiny black, with a purple (in subspecies monedula and spermologus) or blue (in subspecies cirtensis and soemmerringii) sheen on the crown, forehead, and secondaries, and a green-blue sheen on the throat, primaries, and tail. The cheeks, nape and neck are light grey to greyish-silver, and the underparts are slate-grey. The legs are black, as is the short stout bill, the length of which is about 75% of the length of the rest of the head. There are rictal bristles covering around 40% of the upper mandible and 25% of the lower mandible. The irises of adults are greyish or silvery white while those of juveniles are light blue, becoming brownish before whitening at around one year of age. The sexes look alike, though the head and neck plumage of male birds fades more with age and wear, particularly just before moulting. Western Jackdaws undergo a complete moult from June to September in the western parts of their range, and a month later in the east. The purplish sheen of the cap is most prominent just after moulting. Immature birds have duller and less demarcated plumage. The head is a sooty black, sometimes with a faint greenish sheen and brown feather bases visible; the back and side of the neck are dark grey and the underparts greyish or sooty black. The tail has narrower feathers and a greenish sheen. There is very little geographic variation in size. The main differences are the presence or absence of a whitish partial collar at the base of the nape, the variations in the shade of the nape and the tone of the underparts. Populations in central Asia have slightly larger wings and western populations have a slightly heavier bill. Body colour becomes darker further north, in mountain regions and humid climates, and paler elsewhere. However, individual variation, particularly in juveniles and also during the months before moulting, can often be greater than geographic differences. A skilled flyer, the Western Jackdaw can manoeuvre tightly as well as tumble and glide. It has characteristic jerky wing beats when flying, though these are not evident when birds are migrating. Wind tunnel experiments show that the preferred gliding speed is between 6 and 11 metres (20 and 36 ft) per second and that the wingspan decreases as the bird flies faster. On the ground, Western Jackdaws have an upright posture and strut briskly, their short legs giving them a rapid gait. They feed with their heads held down or horizontally. Within its range, the Western Jackdaw is unmistakable; its short bill and grey nape are distinguishing features. From a distance, it can be confused with a Rook (Corvus frugilegus), or when in flight, with a pigeon or chough. Flying Western Jackdaws are distinguishable from other corvids by their smaller size, faster and deeper wingbeats and proportionately narrower and less fingered wing tips. They also have shorter, thicker necks, much shorter bills and frequently fly in tighter flocks. They can be distinguished from choughs by their uniformly grey underwings and their black beaks and legs. The Western Jackdaw is very similar in morphology, behaviour, and calls to the Daurian Jackdaw, with which its range overlaps in western Asia. Adults are readily distinguished, since the Daurian has a pied plumage, but immature birds are much more similar, both species having dark plumage and dark eyes. The Daurian tends to be darker, with a less contrasting nape than the Western. Voice Western Jackdaw calling in flight on Inisheer, Ireland Western Jackdaws are voluble birds. The main call, frequently given in flight, is a metallic and squeaky chyak-chyak or kak-kak. This is a contact or greeting call. A feeding call made by adults to call young, or males when offering food to their mates, has been transcribed as kiaw or kyow. Females in return give a more drawn out version when begging for food from males, written as kyaay, tchaayk or giaaaa. Perched birds often chatter together, and before settling for the night, large roosting flocks make a cackling noise. Western Jackdaws also have a hoarse, drawn-out alarm call, arrrrr or kaaaarr, used when warning of predators or when mobbing them. Nestlings begin making a soft cheep at about a week of age. As they grow, their voice becomes louder until their call is a penetrating screech around day 18. After this, the voice deepens and softens. From day 25, the young cease calling and become silent if they hear an unfamiliar noise. (from wikipedia)