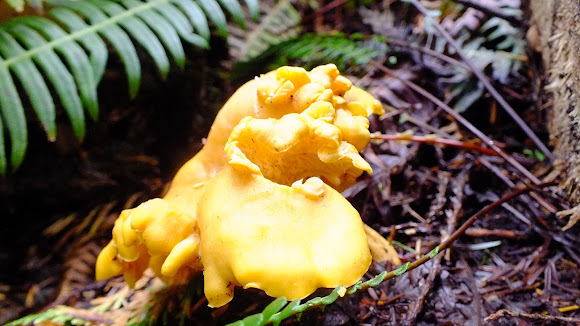 The mushrooms in the genera Cantharellus have fairly well defined caps and stems, or are vase-shaped to trumpet-shaped. Their spore-bearing surfaces occur on the underside of the cap, and range from smooth to wrinkled, to furrowed so regularly and deeply that the wrinkles look like gills--but are actually false gills, rather than blade-like or plate-like structures that are clearly separate from the rest of the cap. Most, if not all, of the species appear to be mycorrhizal.

Chanterelles are associated with either conifers or hardwood trees, depending on species. In the coastal forests of Washington and British Columbia they are often found in damp, mossy riparian zones in the vicinity of hemlock and western red cedar trees.