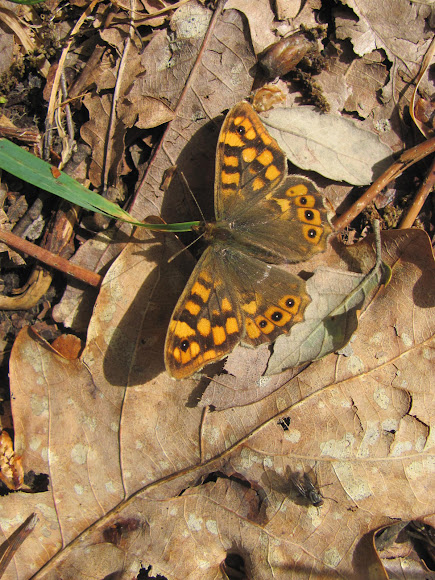 In southwestern Europe and North Africa the subspecies P. a. aegeria has a colour which is more orange in the background; the hindwing underside eyespots are reddish brown rather than black or dark gray. The two forms gradually intergrade into each other. The speckled wood also occurs on the Atlantic island of Madeira. Molecular studies[1] suggest that the African and Madeiran populations are closely related and distinct from European populations of both subspecies, suggesting that Madeira was colonized from Africa and that the African population has a long history of isolation from European populations.

The Speckled Wood (Pararge aegeria) is a butterfly found in and on the borders of woodland throughout much of the Palearctic ecozone. In North Europe, Central Europe, Asia Minor, Syria, Russia and Central Asia. The speckled wood occupies a diversity of grassy, flowery habitats in forest, meadow steppe, forest, woods, glades, alongside hedges and and in wooded urban parks. It is found up to 1500 m. above sea level.

spotted in a mix forest near my house

It is the Speckled Wood, Pararge aegeria!
http://en.wikipedia.org/wiki/Speckled_Wo...)

Thanks very much for the id JeffCrocombe,i'll update it tomorrow :-)