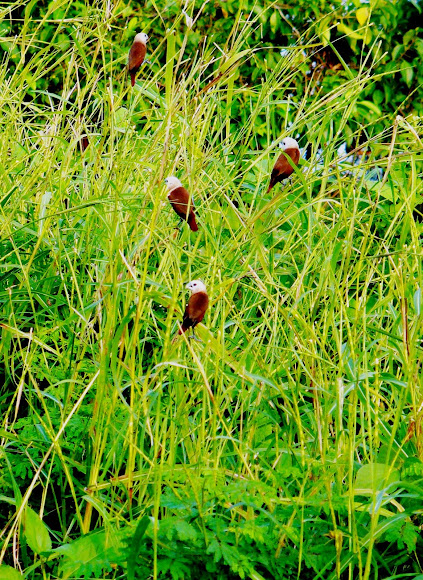 The White-headed Munia (Lonchura maja) is a species of estrildid finch found in Indonesia, Malaysia, Singapore, Thailand and Vietnam. This species is also introduced to Portugal. It is found in wetlands habitat. The status of the species is evaluated as Least Concern.Smallish (11 cm), white headed brown finch. Similar to chesnut Munia but paler brown and entire head and throat white. Young birds are brown on upperparts with underparts and face buff. Iris-brown; bill-grey; feet-pale blue. Voice: high-pitched 'pee-pee'.

Malay peninsula, Sumatra, Java, Bali and Celebes. In Java and Bali this is a fairly common and widespread bird up to 1500 m.It frequents marshes and reedbeds. Like other munias form large flocks during rice harvest but spread out in pairs during breeding season. General behaviour similar to other munias.