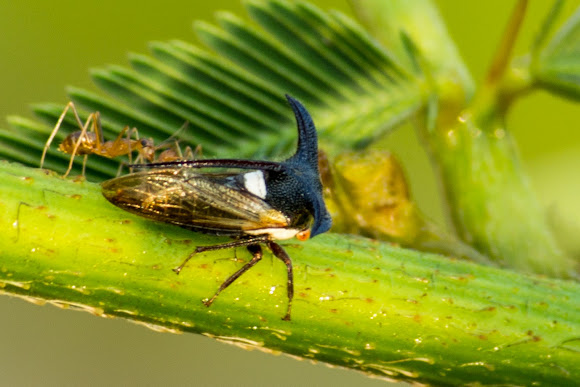 From Wikipedia: Treehoppers (more precisely typical treehoppers to distinguish them from the Aetalionidae) and thorn bugs are members of the family Membracidae, a group of insects related to the cicadas and the leafhoppers. About 3,200 species of treehoppers in over 600 genera are known. They are found on all continents except Antarctica, although only three species are found in Europe. They are best known for their enlarged and ornate pronotum, which most often resembles thorns, apparently to aid camouflage. In some species, the pronotum grows to a horn-like extension, but even more bizarre and hard-to-describe shapes are also found. Thorn bugs, due to their unusual appearance, have long interested naturalists. Distinguishing males from females is accomplished only by looking at the male genitalia. Individual treehoppers usually live for only a few months, but they belong to a lineage that is at least 40 million years old. A team from the Institute of Developmental Biology of Marseille-Luminy in 2011 provide good evidence that the specialised pronotum (or helmet) is not simply an expansion of the prothoracic sclerite, but a fused pair of dorsal appendages of the first thoracic segment, serial homologues of insect wings, which are dorsal appendages of the second and/or third thoracic segments. (Anatomical evidence: The helmet arises as a pair of appendages, attached to each side of the dorsal prothorax by an articulation, with muscles and flexible membrane that allow it to be mobile. Genetic evidence: the same genes are involved in development of the helmet and wings.)

Seen on the invasive Giant Sensitive Plant (Mimosa pigra) growing on the hills behind the town of Sungai Penuh, on the edge of the Kerinci Seblat National Park.

Very nice; you might consider putting the second photo first.