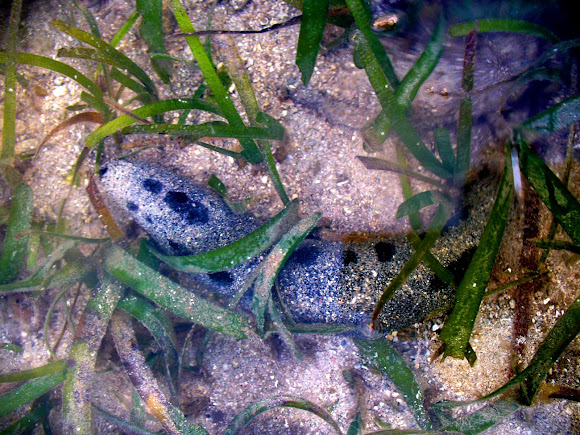 Holothuria atra is a sausage-shaped sea cucumber that can grow to a length of 60 centimetres (24 in) but 20 centimetres (7.9 in) is a more common size. It has a smooth, pliable, entirely black skin which often has sand adhering to it, especially in smaller individuals. The mouth is on the underside at one end and is surrounded by a fringe of 20, black, branched tentacles. The anus is at the other end

Holothuria atra is found in the tropical Indo-Pacific region, its range extending from the Red Sea and East Africa to Australia. It is found on the seabed, in shallow waters on reefs and sand flats and in seagrass meadows at depths of up to 20 metres (66 ft). Its colouring makes it conspicuous but it is very often camouflaged by a coating of sand which may also serve to keep it cool by protecting it from the sun's rays. It favours reef flats where it is not fully exposed to the waves but the water is well aerated, and shallows beside slabs of rock from under which cool water wells out when the tide retreats. In such places it is often found in pools above the low tide mark which are warmed by the sun during the day. Holothuria atra seems to tolerate these high temperatures well and individuals appeared healthy and were feeding when the water temperature rose as high as 39°C