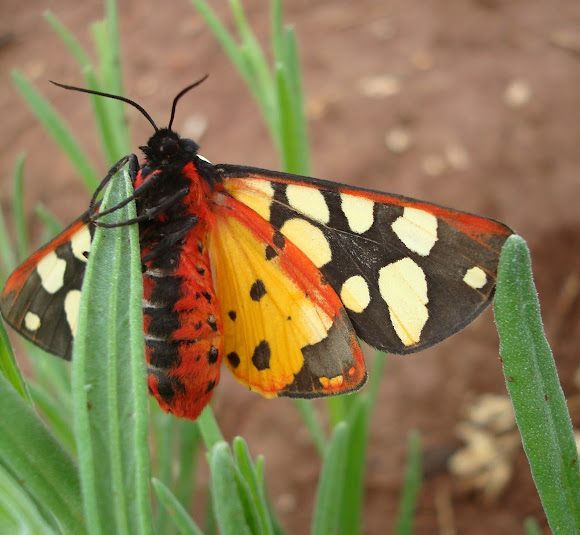 The wingspan of these moths reaches 45–60 mm. They have black forewings with white, broad patches and spots. The orange hind wings have black spots. The thorax is black and the abdomen is reddish-orange. The moths are nocturnal and attracted by light, but the females fly also during the day. By day these moths can be found resting on leaves. Moths of this species fly from March to July depending on the location. They overwinter, but they are relatively sensitive to frost. They can be seen in the spring after hibernation while feeding or seeking for suitable places to pupate. They pupate in May on the ground.

The species is distributed from the Iberian Peninsula across western and southern Europe, Anatolia, western and northern Iran, West Siberia, Southwest Asia and North Africa. This species inhabits woodland, areas with bushes and hedges and sunny open grassy areas. I have spotted it on the a highway!

On the last photo moth says: bye-bye to me in the car ;)

Thank you Noel and Yuko :)