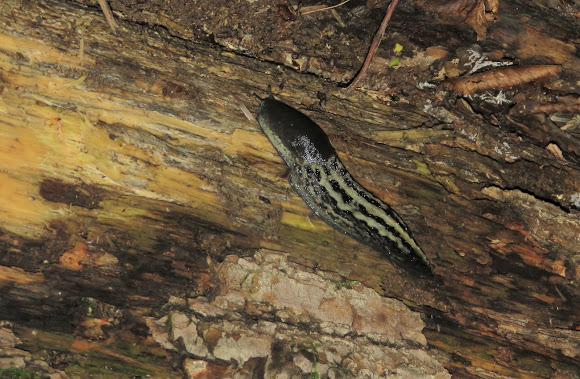 I suppose this is Ash-grey slug also known as Black keel-back slug, the largest terrestrial slug in Europe. The specimen shown here was some 15 to 20 cm in length (not at the maximum extension). It was mainly pale grey, with blackish irregular and parallel stripes and uniformly dark grey mantle.

Found under the bark on a log, abandoned on the forest floor in a protected lowland oak forest, in Geneva lake valley - pic N°4 shows a bit of this habitat.

1. This particular forest is protected as recognized and important habitat of Fire Salamanders, containing an important population of them - few years ago, about 600 of salamanders were counted there during the transect walk. And in fact, I was there because of Salamanders as there are few protective actions for this population ongoing every October. 2. At first I took it for a Leopard slug, because of the size and stripes (and to be honest, also because my knowledge of slugs is extremely limited and I never heard of Ash-grey Slug before...). I also forgot to check the colour of the sole and slime. These two species can easily be confounded as they are both highly variable in their colourings, and they are roughly similar in size. The best way to distinguish them is by the colour of the sole: ash-grey slug has a tripartite sole - its foot shows two darker stripes toward margins, while the central stripe is pale. The sole of Leopard slug is uniformly pale grey. These new lessons learnt, I may be heading back to that forest one of these nights to try to find them again and make sure of the ID.