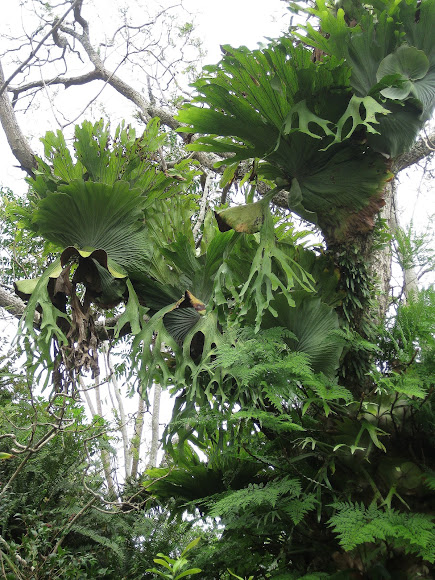 Giant Staghorns (Platycerium species), but there are four species of Giant Staghorn (P. grande, P. holttumii, P. superbum, and P. wandae). Exactly which species, I'm not sure. Most likely P. superbum, an Austalian native which is common in Queensland and northern NSW. P. grande is not an Australian native. All are grouped as epiphytic ferns, meaning they grow on the branches of tree canopies or on fallen logs. This large fern produces enormous sterile fronds, like a large battle shield, with forks off of the top edge. The fertile fronds have two lobes with long fingers hanging down off of their lower edge. In between those two lobes, on the underside of the frond is a large spore patch. Each fertile frond also has a second spore patch located on the lower side of a large triangular lobe. The fertile fronds can reach lengths of 6'. The spread across the top of the sterile fronds can be 6' as well.

All species of staghorn thrive in light shade areas with occasional patches of sunlight. Although they’ll cope with light frosts, the plants need good protection in cold areas. Tamborine Mountain is approx. 550m above sea level, has deep ravines and gullies which are well forested, including areas of rainforest. These sheltered areas are very moist year round. Plants like staghorns, elkhorns, and various other fern species do very well in these rainforest areas. They grow in warm, humid forests and occur from far Northern Queensland to southern New South Wales. It's best suited to highland, tropical gardens, and lowland coastal gardens, as long as it's protected from salt spray and hard frosts. These plants grow equally well on tree branches, fallen logs and rocks. These Giant Staghorns were located not far from Tamborine Village and the Botanical Gardens, both areas well sheltered from the strong gale-force winds that can roar in from the coast.