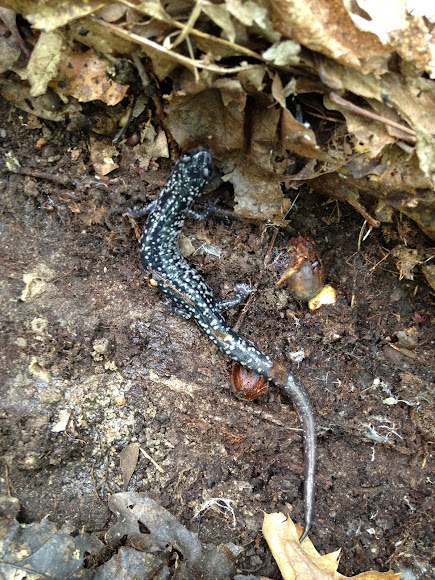 I've never found these guys when I'm doing my searches at Huntley Meadows, but today I found three in the span of a few minutes! This particular one pictured was a whopper - 18.4 cm (7.2 inches) long, which is bigger than average, but unfortunately still doesn't beat the record length of 20.6 cm. Anyways, if you ever pick up a slimy salamander, you will immediately understand where they get their name. They are very slimy and hard to get a hold on. However, they could also be appropriately named sticky salamanders because their slime is incredibly sticky and hard to wash off. I had to scrub my hands five times before I got off all the gunk. But I don't mind because it was so nice to see them! This one was by itself, but the other two I found were under a log together. Hopefully I hadn't interrupted anything intimate!

Wow, nice find! I've had great luck at Huntley with ambystomids, but never with a slimy! I'm new to this site (and I see this was posted May 10), and was wondering where in the park this was found (I know some herpers don't like sharing locations, and if you don't want to, I understand)? I frequent the "informal trail" area, which is infested with spotted, marbled, and red-back salamanders, but again, I have never seen a slimy there. Very cool find and shot.