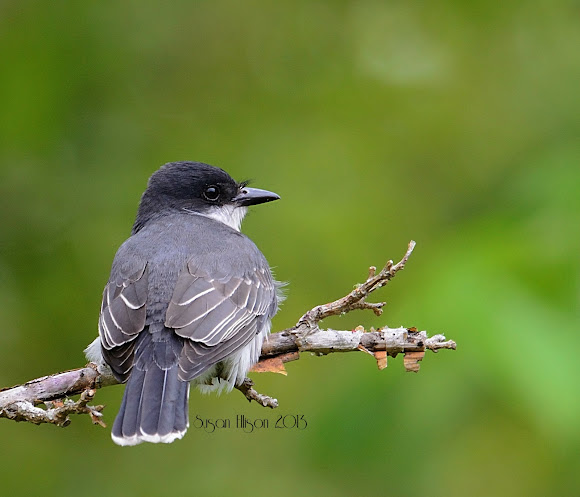 this bird is migrating thru High Island, TX. The Eastern Kingbird is a sturdy, medium-sized songbird with a large head, upright posture, square-tipped tail, and a relatively short, straight bill. With dark gray upperparts and a neat white tip to the tail, the Eastern Kingbird looks like it’s wearing a business suit. And this big-headed, broad-shouldered bird does mean business—just watch one harassing crows, Red-tailed Hawks, Great Blue Herons, and other birds that pass over its territory. Eastern Kingbirds often perch on wires in open areas and either sally out for flying insects or flutter slowly over the tops of grasses. They spend winters in South American forests, where they eat mainly fruit.

yards, fields, pastures, grasslands, or wetlands, and are especially abundant in open places along forest edges or water. They spend winters in forests of South America.

On country drives you can also often spot them as they sit on fence wires; it also helps to learn their distinctive call note, which sounds like an electric spark or zap. You can see Eastern Kingbirds starting in March or April until they head south again in late July or August.

thanks SummerNicole for your confidence in me. I am really no expert in camera equipment but I will try to answer your question the best I know how. If you are a birder, then you need a big lens minimum a 300mm F/2.8. For most of the bird shots, I usually use a 500mm F/4 and sometimes with a 1.4 teleconverter to get more lens for more details. But if you are just starting out, you could get a 70-200mm zoom lens then upgrade from there because the bigger the lens...the more expensive the cost...yikes!

Hi Susan, I love your photographs! They are beautiful...may I ask what type of lens you are using? I'm just barely getting into nature photography and can't decide which my next purchase should be. :) Thanks for your help in advance.