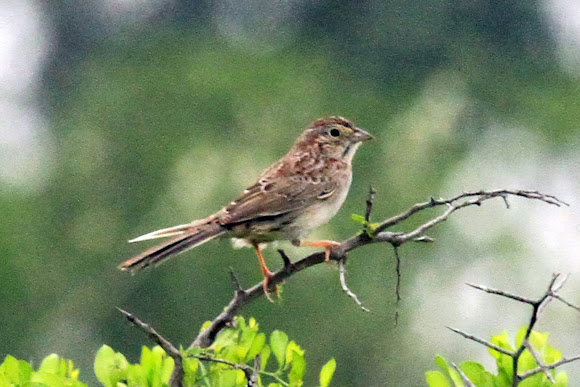 The sparrow has a long tail, gray-brown with white corners, and has dark marks on the back and sides. The species resembles Botteri's Sparrow because of its size and marks, but Boterri's Sparrow is a weaker shade of gray. The best way to tell the differences between the two is the song of Cassin's Sparrow. Both the males and females are the same shade of gray and are 5 to 6 inches, although males are bigger. The Cassin's Sparrow is a fairly large, plain, grayish sparrow that lacks conspicuous markings. In flight, the long, roundish tail is obvious and the white tips of the tail feathers are sometimes apparent. This species is most easily identified by its distinctive song and dramatic skylarking behavior during the breeding season. Although often characterized in the literature as secretive and difficult to observe when not singing, Schnase (1984) observed that Cassin's Sparrows readily accommodated the presence of an observer, especially early in the breeding season

Singing from the top of bushes, then doing an aerial display (skylarking). Territorial males sit in low bushes or grass, or on the ground to sing, but often give spectacular flight-songs. At the beginning of the breeding season, all song is from a stationary, exposed perch and often involves reciprocal proclamation of the primary song among males. Flight songs and skylarking are infrequent until later, in association with the presence of returning females. In flight songs (or skylarking), the territorial male flies up from an exposed perch, such as a bush, to as much as 5 – 10 m in the air, then sings as he glides or flutters down in an arc to a nearby bush or the ground. During the descent, wings are held flat, the head is arched backwards, and the tail is elevated. Song can be heard from mid-February to early September, depending on location, with considerable night singing at the height of the season reported by some.