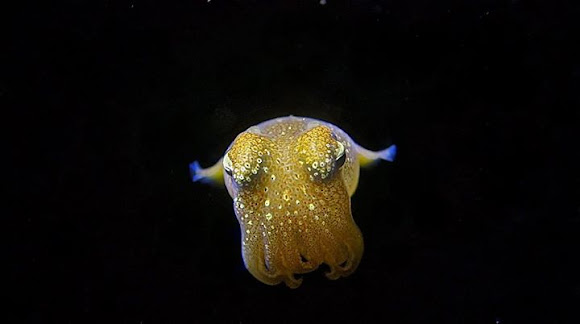 Euprymna berryi, commonly called Humming-bird Bobtail Squid or Berry's bobtail squid among various other vernacular names, is a species mollusc cephalopod in the family Sepiolidae. The Humming-bird Bobtail Squid is widespread throughout the tropical waters of the central Indo-Pacific area from the Indonesia to the Philippines. Its size varies according to the sex, males are not bigger than 3 centimetres (1.2 in) while the female reaches 5 centimetres (2.0 in) length.

Shallow waters among sandy and sea grass bottom. Nocturnal creatures, they tend to come out at night to feed/hunt shrimps and krills.

This one can be considered among the bigger of the Bobtail squid, around 2.5cm in size. They are fun to watch as they changes colors as they move around. When they don't feel comfortable having dive lights shine on them, they will start to dig into the sand to hide themselves and will even use their tentacles to collect sands to place over the top of their body and head until only their eyes are exposed!

Amazing. I wouldn't have thought any of those pictures were of the same species!

Fantastic spotting ! such precious creatures. Thanks for this and for the information.

Amazing animal. That colour in the last shot is incredible. Thanks yet again Albert.

Thanks, @KarenL for selecting this spot as Fun Fact :), with additional info of this cute and interesting Bobtail squid.

Fun Fact! Bobtail squid have evolved a symbiotic relationship with a species of bioluminescent bacteria that inhabits a special light organ in the squid’s mantle. The squid provides the with bacteria sugar and amino acids and in return hide the bacteria hide the squid’s silhouette when viewed from below by matching the amount of light hitting the top of the mantle, rendering them almost invisible to predators. https://www.facebook.com/projectnoah/pho...