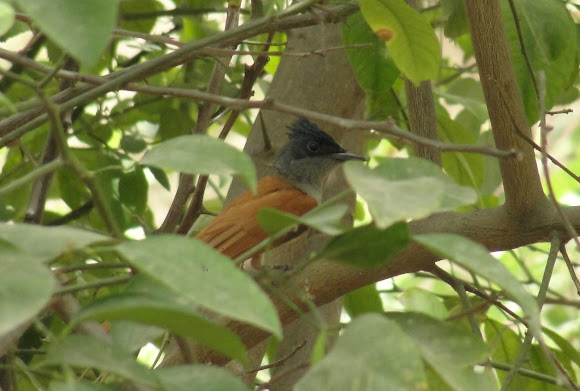 Young males are rufous and have short tails. They acquire long tails in their second or third year. Adult males are either predominantly bright rufous above or predominantly white. Some specimens show some degree of intermediacy between rufous and white. Long-tailed rufous birds are generally devoid of shaft streaks on the wing and tail feathers, while in white birds the shaft streaks, and sometimes the edges of the wing and tail feathers are black.

Asian Paradise-flycatchers inhabit thick forests and well-wooded habitats from Turkestan to Manchuria, all over India and Sri Lanka to the Malay Archipelago on the islands of Sumba and Alor. They are vagrant in Korea and Maldives, and regionally extinct in Singapore. Asian Paradise Flycatchers are noisy birds uttering sharp skreek calls. They have short legs and sit very upright whilst perched prominently, like a shrike. They are insectivorous and hunt in flight in the understorey. In the afternoons they dive from perches to bathe in small pools of water.