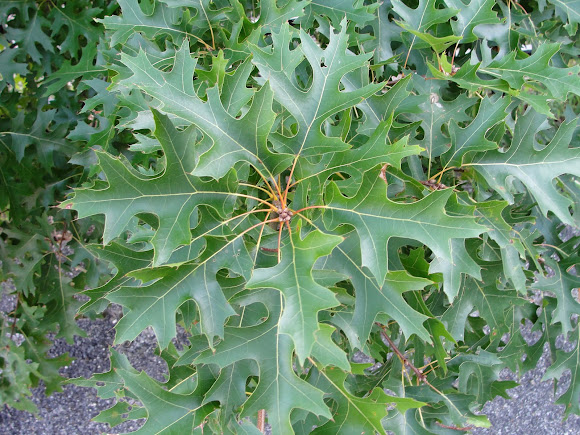 Scarlet Oak is mainly native to the eastern United States, it is also native in the extreme south of Ontario, Canada. It is a medium-large deciduous tree growing to 20-30 m tall with an open, rounded crown. The leaves are glossy green, 7-17 cm long and 8-13 cm broad, lobed, with seven lobes, and deep sinuses between the lobes. Each lobe has 3-7 bristle-tipped teeth. The leaf is hairless (unlike the related Pin Oak, which has tufts of pale orange-brown down where the lobe veins join the central vein). It flowers in April or May, depending on latitude, elevation, and weather. Two growing seasons are required for the acorns to mature. The acorns are ovoid, 7-13 mm broad and 17-31 mm long, a third to a half covered in a deep cup, green, maturing pale brown about 18 months after pollination. Scarlet Oak is often planted as an ornamental tree, popular for its bright red fall color.

Scarlet Oak absolutely prefers dry, acidic soils in which to thrive. It also likes moist, well-drained soils, but does not tolerate alkaline soils, as severe chlorosis and stunted growth will develop. Soils can be fertile and deep, but most often are average to poor, rocky or gravelly, and relatively thin in the wild where it co-dominates with other drought-tolerant trees.