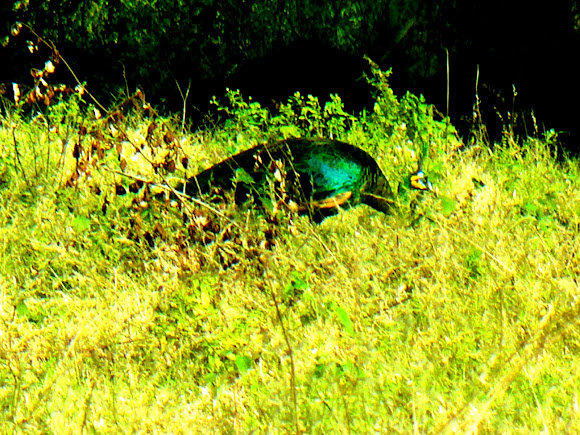 Green Peafowl are large birds, amongst the largest living galliforms in terms of overall size, though rather lighter-bodied than the Wild Turkey, and perhaps the longest extant, wild bird in total length. The male is 1.8–3 m (5.9–9.8 ft) in total length but this includes its tail covert (or "train") which itself measures 1.4–1.6 m (4.6–5.2 ft). The tail coverts are even longer than those of the male Indian Peafowl but are shorter than those of the arguses. The adult female is around half the total length of the breeding male at 1–1.1 m (3.3–3.6 ft) in length. By body mass, the Green Peafowl is the most sexual dimorphic of galliforms and among the most dimorphic in size of all birds. The adult male weighs 3.85–5 kg (8.5–11 lb), which is around 4 times as heavy as the adult female, at 1–1.2 kg (2.2–2.6 lb). It has a relatively large wingspan that averages around 1.2 m (3.9 ft) and can reach 1.6 m (5.2 ft) in big males. The Green Peafowl is capable of sustained flight and is often observed on wing

Green Peafowls are found in a wide range of habitats including primary and secondary forest, both tropical and subtropical, as well as evergreen and deciduous. They may also be found amongst bamboo, on grasslands, savannas, scrub and farmland edge. In Vietnam, the preferred habitat was found to be dry deciduous forest close to water and away from human disturbance. Proximity to water appears to be an important factor