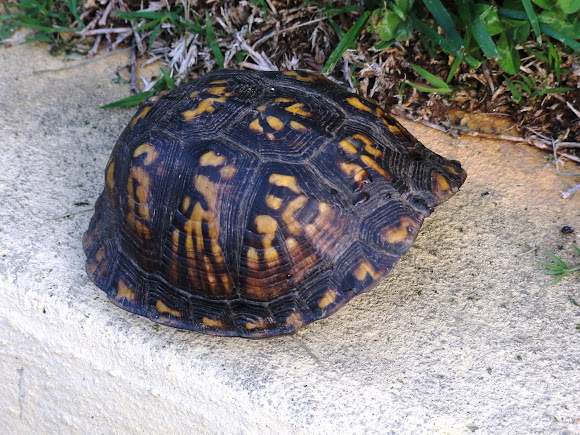 Eastern box turtles have a high, dome-like carapace and a hinged plastron that allows total shell closure. This specimen is clammed up tight! I was sad to read the following: In 2011, citing "a widespread persistent and ongoing gradual decline of Terrapene carolina that probably exceeds 32% over three generations", the IUCN downgraded its conservation status from Near Threatened to Vulnerable.

Eastern box turtles prefer deciduous or mixed forested regions, with a moderately moist forest floor that has good drainage. Bottomland forest is preferred over hillsides and ridges. They can also be found in open grasslands, pastures, or under fallen logs or in moist ground, usually moist leaves or wet dirt. They have also been known to take "baths" in shallow streams and ponds or puddles, and during hot periods may submerge in mud for days at a time.

Spotted in the parking lot near a brushy area between a church and neighborhood.