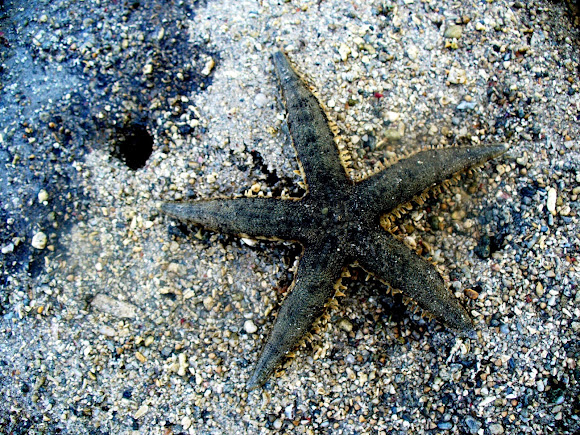 Family Archasteridae Adults diameter with arms to about 12-15cm. Smaller juveniles are rarely seen. Body somewhat rounded (not flat). Arms long and tapered to a sharp tip, and edged with short flat, blunt spines. Most have five arms, but those with three, four and six arms are sometimes also seen.The underside is pale, with large tube feet tipped with suckers. Colours and patterns on the upperside are highly variable in shades of greyish blue, to brown and beige. Sea stars of the genus Archaster have a unique mating behaviour. The male, which is usually smaller, seeks out a female and then moves on top of her, his arms alternating with hers. Their reproductive organs do not actually meet. Sperm is merely released by the male when the female releases her eggs, for external fertilisation. This behaviour is believed to increase the chances of external fertilisation. So much so that the males do not need to be large and are thus usually smaller than the females, a rare gender difference among echinoderms. The only other sea star known to practice this kind of mating behaviour is the closely related Archaster angulatus.

It usually inhabits areas of the seabed with soft sediments including sand, silt and seagrass meadows. Larval settlement occurs among mangroves, while individuals gradually move to seagrass and sandy habitats as they age