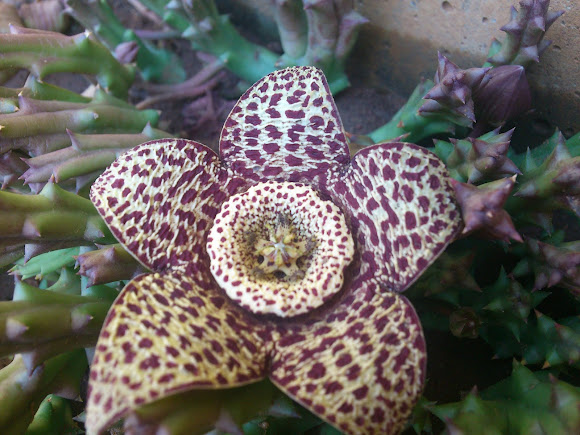 Commonly called “carrion flower,” Stapelia lepida has more than earned its name. Although the plant itself is unassuming and could easily be overlooked in its natural habitat, it is actually quite deceitful.Preferring to live low to the ground and most often under the shade of another taller plant, S. lepida bides its time for much of the year. Only upon flowering does the deceitful nature of this small succulent become clear. The flower of S. lepida is visually appealing, and many collectors grow S. lepida simply for the beauty and uniqueness of the flower itself. The secret, however, is the smell. The scent of the flower of S. lepida is strikingly similar to that of rotting flesh.[1] This is of course no accident, as S. lepida uses this smell to attract flies that find the odor enticing and subsequently lay their eggs on the flower, convinced it is a corpse that will provide food for their newly hatched larvae. In most cases of pollination the process is beneficial for both the plant and the pollinator; the plant gets fertilized and the pollinator is provided with nectar or pollen as a food source. In the case of S. lepida, the pollinator is deceived into thinking it has found a suitable place to lay its eggs and instead has wasted valuable energy and deposited eggs that will not survive.

Project Noah is a tool for people to learn about wildlife, share wildlife spottings, build nature journals and engage in citizen science. Here you will find a friendly community of people passionate about wildlife and conservation.