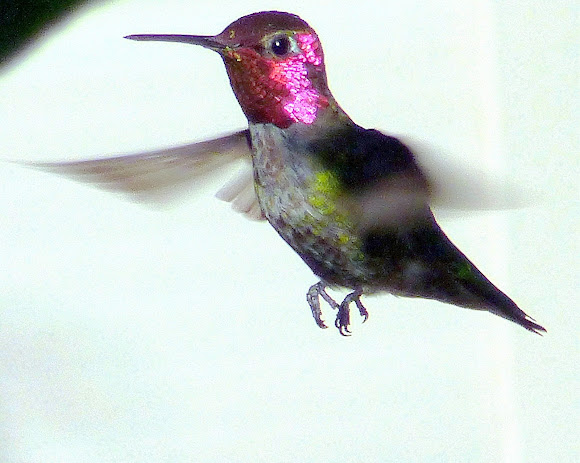 Anna’s Hummingbirds are among the most common hummingbirds along the Pacific Coast, yet they're anything but common in appearance. With their iridescent emerald feathers and sparkling rose-pink throats, they are more like flying jewelry than birds. Though no larger than a ping-pong ball and no heavier than a nickel, Anna’s Hummingbirds make a strong impression. In their thrilling courtship displays, males climb up to 130 feet into the air and then swoop to the ground with a curious burst of noise that they produce through their tail feathers. http://www.allaboutbirds.org/NetCommunit...

True Karen ,hummingbirds are intelligent!!
Hummingbirds are very smart and they can remember every flower they have been to, and how long it will take a flower to refill.
http://www.worldofhummingbirds.com/facts.......

Karen, I would really love to study other hummingbirds like the Rufous in detail. Anna's is the most common bird ,out here.

They are one of my favorite visitors. They show a lot of intelligence and awareness. And it never ceases to amaze me to see these guys flying around on a snowy day and coming to my feeders

Thank you for all the comments and likes.I love hummingbirds.