Amanita sp. (most likely A. flavella) 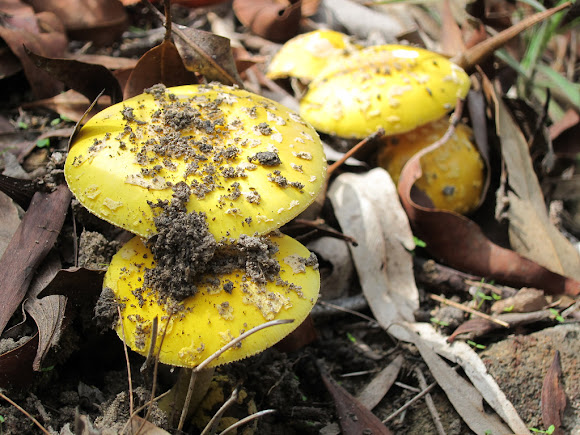 Bright yellow agaric mushrooms. Small scales on caps. Gills pale and caps transparent in parts when viewed from beneath. Caps also appear to flatten out with age, although there were no really old or dead specimens. However, there was one specimen that looked older and its skin was a darker yellow and wrinkled. No more than a dozen specimens found in area 2m.squ. Signs of feeding on caps by snails or slugs. Stipes smooth with ring, yellow at top but becomes whiter nearer the base. Largest specimen no more than 10 cms in height.

Many thanks to Daniele and Marc Pralong who spotted these specimens. Chances are I would have missed them. Amanita flavoconia http://en.wikipedia.org/wiki/Amanita_fla... is a similar species but it occurs in the eastern United States, although there are reports of it being found in Australia. Perhaps these sightings have been confused with the local species and the ID incorrect.

I'll start doing that, Mark. These were spotted on the walk I did with Daniele and Marc last weekend. Time for me to get more serious with my fungi spottings.

Superb looking fungi Neil. You sure find some interesting ones. You might have to slice some of these vertically as well as do spore prints. If you collect the spores it's good to put the cap half on black and half white.

I always appreciate your suggestions, CorduneanuVlad. One Amanita species that is found in Australia is Amanita flavoconia. Image searches lead me to think this is a worthy contender.

You could take a cap and leave it on a A4 paper overnight. If you cover the cap with a glass so no air curents get to the cap, you should be able to get some spores. The color of the spors could help with the identification, or if you have a microscope you could see the shape of the spores.

The only mushroom that I can think of when I see your pictures is the Yellow Fly Agaric (Amanita muscaria var. guessowii), but this grows in North America and is larger than these ones... Who knows, this might be a new species... Ater all, I don't think a lot of the Australian mushrooms are identified.