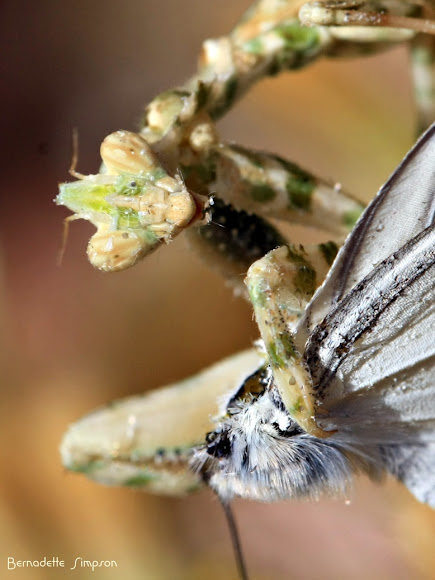 very well camouflaged mantis, about 3.5 cm in length, feeding on a butterfly (Pontia sp.); "A mantis will catch prey items and grip them with grasping, spiked forelegs. The praying mantis usually holds its prey with one arm between the head and thorax, and the other on the abdomen. Then, if the prey does not resist, the mantis will eat it alive. However, if the prey does resist, the mantis will often eat it head first, some species of mantises being more prone to the behaviour than others. Unlike sucking predatory arthropods, a mantis does not liquefy prey tissues or drain its prey's body fluids, but simply slices and chews it with its mandibles as convenient, often from one end." ~wiki

spotted on an Iphiona sp. plant in a coastal desert wadi

Thank you so much for your help, ForestDragon! :-)

Bernadette, I think there is a very good chance that this is Blepheropsis mendica as you thought. Nymphs can be more difficult but I think this species is pretty unique looking. I think you are safe to ID this little nymph as that species.
A captive nymph: http://photo.net/photodb/photo?photo_id=...
Another site with captive information: http://www.keepinginsects.com/praying-ma...

Thank you all! It was amazing to watch. I think he offered me a bite. ;-)

Wow, a pretty gruesome series you have there! Amazing mantid - nice spotting :)