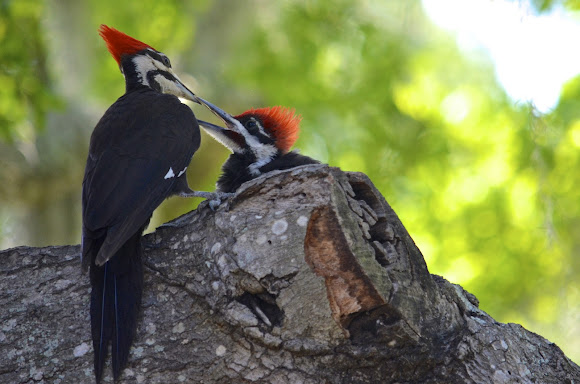 They are mainly black with a red crest, and have a white line down the sides of the throat. They show white on the wings in flight. The flight of these birds is strong and direct but has an undulating quality, similar to the relatively unique flight-style of all woodpeckers. Adult males have a red line from the bill to the throat, in adult females these are black. Two species found in the Old World, the White-bellied and Black Woodpeckers are closely related and occupy the same ecological niche in their respective ranges that the Pileated occupies in North America. The only North American birds of similar plumage and size are the Ivory-billed Woodpecker of the Southeastern United States and Cuba, and the related Imperial Woodpecker of Mexico. However, unlike the Pileated, both of those species are extremely rare, if not extinct. Most reports of the Ivory-billed Woodpecker are believed to be erroneous reports of the far more common Pileated.

Their breeding habitat is forested areas across Canada, the eastern United States and parts of the Pacific coast. This bird favors mature forests and heavily wooded parks. They specifically prefer mesic habitats with large, mature hardwood trees, often being found in large tracts of forest. However, they also inhabit smaller woodlots as long as they have a scattering of tall trees.

This mother and young male let me get pretty close. I saw three of them together a week earlier. This day I only saw the two.

Thank you very much, Tim.

Wonderful series. I love pileated woodpecker. Thank you very much for sharing!