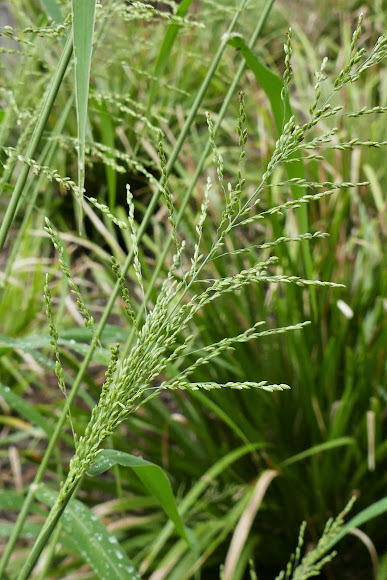 Megathyrsus maximus*, known as "guinea grass" and "green panic grass", is a large, perennial bunch grass that is native to Africa, Palestine, and Yemen. It has been introduced in the tropics around the world. A perennial grass with short underground stems (rhizomes) forming tufted clumps and aboveground stems that are usually erect. This subspecies can grow upwards of 3 metres tall, but is usually about 2 metres in height. Guinea grass is a good example of a useful fodder species that causes problems when growing in the wrong place. In the state of Queensland, the Queensland Acclimatisation Society introduced Guinea grass to 22 locations between 1865 and 1869. It has been widely naturalised in Australia, although is still considered a weed. This spotting was a modest little patch of guinea grass, and I don't recall seeing it in any other part of the reserve. Let's hope it stays that way.

Spotted at Purga Nature Reserve, Ipswich SEQ. Surrounding area cleared farmland, this region is freshening up with rain after a prolonged drought. This is usually a wetland area that is periodically waterlogged during wet periods. https://www.ipswich.qld.gov.au/__data/as... According to Ipswich Council, this small reserve constitutes "the largest protected area of endangered Swamp Tea-tree forest in the world."

Thanks, Brian. And there are two subspecies too. There's always something new to learn.

Great job on identifying this one!