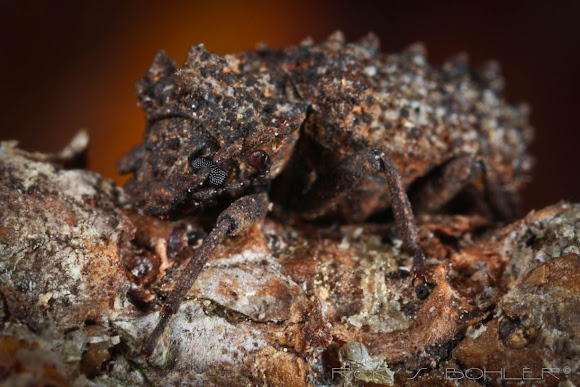 The Horned Fungus Beetle grows to about half an inch long. It is dark brown or black, and very rough. Males and females are easy to tell apart. Males have two long "horns" projecting from their heads, with one shorter, forked horn in the middle, down near the mouth. Female Horned Fungus Beetles have no horns. She does have small bumps on her head.

These beetles are found in the woods. They eat mostly fungus, but they also eat dead and dying tree trunks. After mating, the female Horned Fungus Beetle lays eggs inside, or on top of, fungus. The eggs hatch into larvae which eat the fungus. They then become pupae (resting stage) inside the fungus or in the soil near the fungus. Adults hatch from the pupae in the summer. These beetles use many different fungi, especially polypore fungi, such as Mossy Maple Polypore and Crowded Parchment. If disturbed, Horned Fungus Beetles will play dead and stay motionless, trying to resemble rotted wood. They also release a foul-smelling chemical if they feel the warm breath of a mammal.

Horned Fungus Beetles help fungi by carrying spores to new places. Mushroom spores are like the seeds of a plant. When a beetle climbs around the gills of a mushroom, spores stick to its body. Later the spores can grow into new fungi in a new place.

Wow, a beetle with a fungi diet!