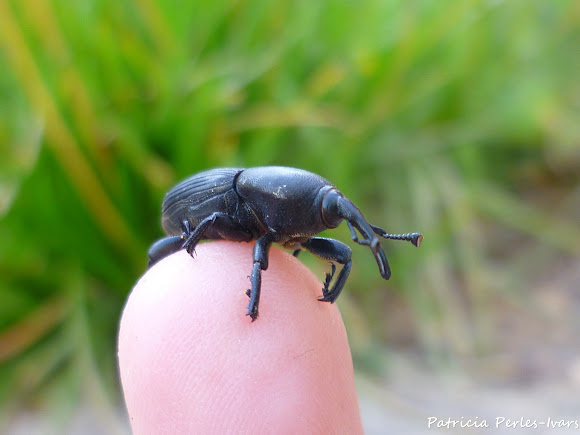 Scyphophorus acupunctatus is becoming a major pest of native Agavaceae and Dracaenaceae species worldwide. Native to Mexico, it has decimated populations of Agave crops there, in particular species used in the tequila and henequen industries. The importation of ornamental Agave plants worldwide has facilitated S. acupunctatus to establish in many parts of the world, particularly in Central America and the Carribean, in Africa, Asia and South America. On its host species, it causes rot and sometimes mortality due to its larvae boring holes which then facilitates micro-organims entering the host. Due to the species being found generally inside the host species, typical insecticides have proven ineffective. However research on the species' pheromones has shown that these could be a potential management tool, attracting individual adults away from hosts to collection sites. The adult wevil body length is between 10-19mm, body colour is black, without dorsal scales.

agricultural areas, host, scrub/shrublands. Scyphophorus acupunctatus is a specialist insect attacking plants belonging to the Agavaceae and Dracaenaceae (Ruiz-Montiel et al, 2008). It attacks sisal (Agave sisalana) and other plants such as ornamentals (Beaucarnea, Dasylirion and Yucca, Tuberose, Polianthes tuberosa) (Walker 2008c). Larvae and adults of this species are found in roots, lower leaves, and inside the heads, especially on plants already in the process of putrefaction.

Found inside an Agave attenuata #5 and #6 larva