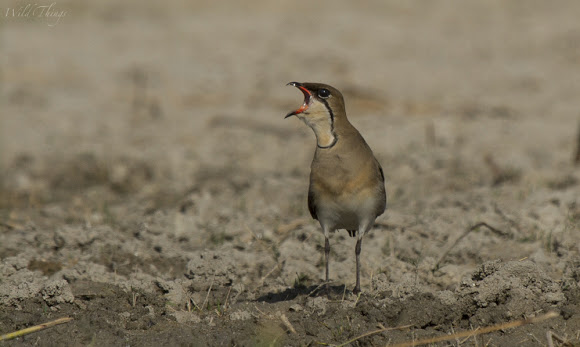 These birds have short legs, long pointed wings and long forked tails. They have short bills, which is an adaptation to aerial feeding. The back and head are brown, and the wings are brown with black flight feathers. The belly is white. The underwings are chestnut. Their most unusual feature of the pratincoles is that although classed as waders they typically hunt their insect prey on the wing like swallows.

Very good views are needed to distinguish this species from other pratincoles, such as the very similar Collared Pratincole, which also has a chestnut underwing, and Black-winged Pratincole which shares the black upperwing flight feathers and lack of a white trailing edge to the wing. These features are not always readily seen in the field, especially as the chestnut underwing appears black unless excellent views are obtained. Better quality pic at: https://www.flickr.com/photos/satyenmeht...