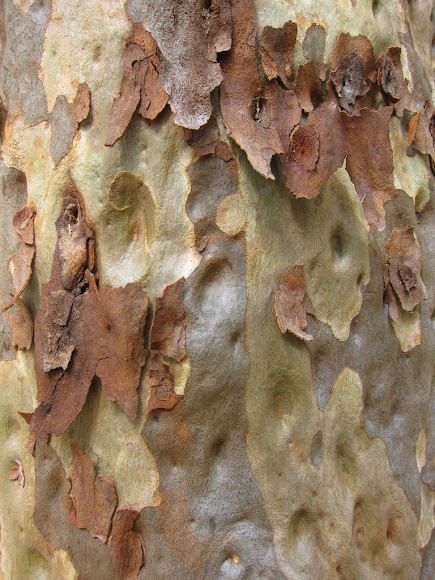 I am always fascinated by the texture of the bark on Red Gums. It's unlike any other tree I've ever seen, and this particular spotting decided to grow sideways rather than straight up. Also known as the Smooth-barked Apple, Rose Apple and Rose Gum. The Red Gum differs from the majority of gum trees in that it is not a Eucalyptus, but rather a closely related genus. It's a large, wide, spreading tree usually seen of a height between 15 and 25 m. The trunk is often gnarled and crooked with a pink to pale grey, sometimes rusty-stained bark. It's characterised by a distinctive orange or pink hue to the trunk when the bark has been newly shed. The colour fades with time and is a more subdued greyish hue in winter. White flowers occur in summer.

Native bushland in the Mt. Coot-tha Forest Reserve. This and other Red Rums were spotted on the Stringybark Track.

This is a very important tree for fauna with respect to hollow log formation in older specimens which are used by many species of vertebrate fauna for both breeding and roosting, possums being one example. The nectar is a major source of food for many species including numerous invertebrates, flying foxes, and the seeds eaten by parrots.

Thanks, Mac. This species also makes for some excellent honey. A very popular tree for apiarists.

Thanks, Leanne. These are one of my favourite native trees. I love the texture of the bark, but also how the light affects the colour at different times of the day. Truly magic :-)

Amazing trunk there Neil. I too, love bark :)