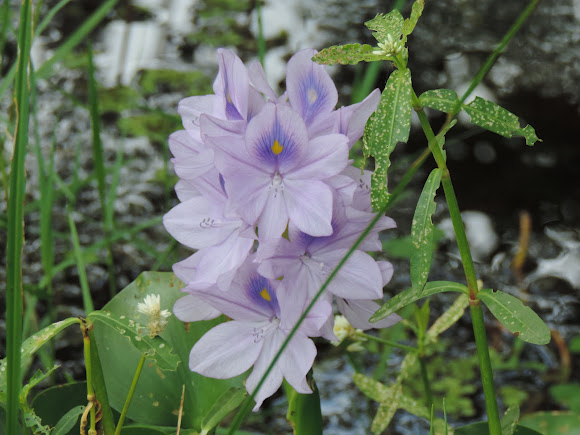 Water hyacinth is a free-floating perennial aquatic plant(or hydrophyte) native to tropical and sub-tropical South America. With broad, thick, glossy, ovate leaves, water hyacinth may rise above the surface of the water as much as 1 meter in height. The leaves are 10–20 cm across, and float above the water surface. They have long, spongy and bulbous stalks. The feathery, freely hanging roots are purple-black. An erect stalk supports a single spike of 8-15 conspicuously attractive flowers, mostly lavender to pink in colour with six petals.

Large populations in the ponds. When not controlled, water hyacinth will cover lakes and ponds entirely; this dramatically impacts water flow, blocks sunlight from reaching native aquatic plants, and starves the water of oxygen, often killing fish (or turtles).

Water hyacinth is thought to be native to the Amazon River basin of South America. It was introduced to the United States in 1884 at the Cotton States Exposition in New Orleans, Louisiana. It spread across the southeastern U. S. and was identified in Florida in 1895. It was reported to be in California in 1904. Reference: http://www.se-eppc.org/manual/EICR.html