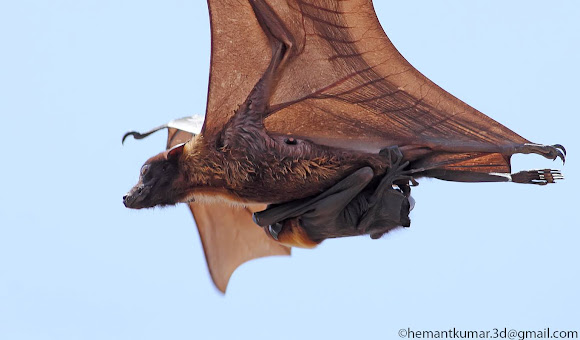 The Indian flying fox (Pteropus giganteus) is a species of megabat in the Pteropodidae family. It is found in Bangladesh, China, India, the Maldives, Nepal, Pakistan, and Sri Lanka. Also known as the greater Indian fruit bat, it lives in mainly forests. It is a very large bat with a wingspan between 1.2 and 1.5 m (3 ft 10 in and 4 ft 10 in). It is nocturnal and feeds mainly on ripe fruits, such as mangoes and bananas, and nectar. This bat is gregarious and lives in colonies which can number a few hundred. Their offspring have no specific name besides 'young'. They have one to two young. The Indian flying fox lives in tropical forests and swamps, where a large body of water is nearby.

Please describe the habitat where you photographed this bat under "Habitat". It is a description of the place you found it, not a description for the general habitat of the species from a website. Thanks

Wonderful series! How did you capture these!

Wooow..amazing! I did not know they even fly with their babies. Many thanks for sharing in PN!

Getting a good zoom cam soon. Won't be long before you see Afri-bats again ; )

@Gilma Jeanette They are briefly dipping into the water for 2 purposes: To drink by wetting the belly fur, and then licking the water from the pelage, and in dry & hot regions for thermoregulation, i.e. to cool down.

Amazing series!! HemantKumar.
Is it carrying a young one and what is it doing in the water and in the daytime??
Never seen one before and I really think You have the best pictures and I got the best introduction.

Fabulous photos, Hemant. And she's got a pup too! How lucky you are to have seen this. Well done on this amazing spotting.

Is it caring something?