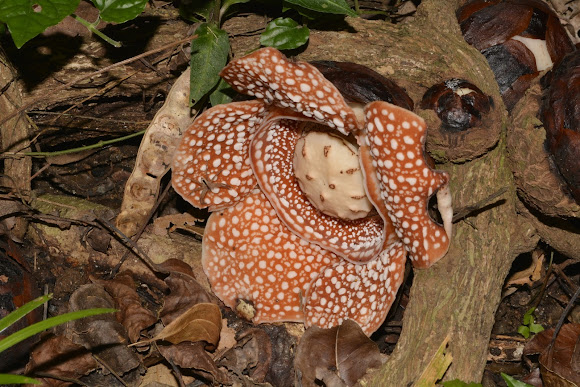 A very small Rafflesia flower, just around 20 cm in diameter (some species from Borneo grows up to 1 meter) and strangely, it doesn't has the pungent odor of rotting. Pic #3 shows 4 more buds of different stage of bloom. Up to Year 2010, Philippines reported up 10 species of Rafflesia flowers located at various parts of the country, but none was reported in the location where this specimen was spotted! Rafflesia flower is listed as rare plants in the Philippines.

The guide that we hired for our trek in the forest wasn't familiar with the Rafflesia flower and when we showed it to him, he wasn't sure if its the first time for him to see it in that forest. Further checks on Rafflesia manillana reveals that this specie is endemic to Philippines and is listed in the DENR List of Threatened Species and considered critically endangered as per this news report : http://www.sunstar.com.ph/pampanga/local... New Organism to Project Noah

Thanks, @Dan :)
Not sure if I am the first to spot it in that area, just couldn't find any reference of it being see in that location before.

Wow Albert! Fantastic spotting! Nice that you were the first to spot it in that area really amazing, I love Rafflesia!

Yes, @ColtMooney, its a genus of parasitic flowering plants.
The plant has no stems, leaves or true roots and the only part of the plant that can be seen outside the host vine is the five-petaled flower

Almost seems like a fungi instead of a flower

@hernandezwolf99, strangely, this one doesn't has strong foul smell at all!

Hey.. Did it smell really bad