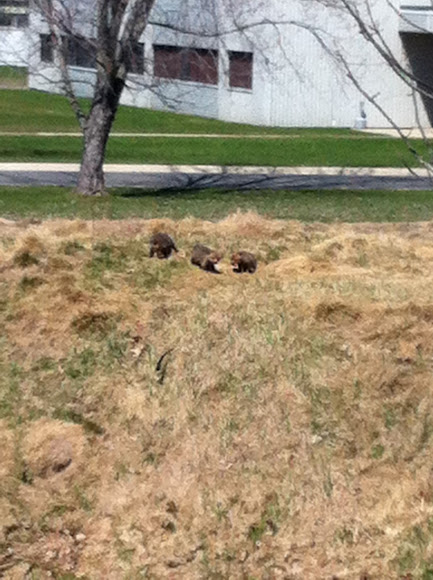 Red foxes are the most widely distributed wild carnivores in the world, occurring in North America, Asia, Europe, and North Africa. They are also widespread in Australia, where they were introduced in about 1850 so that fox-hunters would have something to hunt. Their range in North America has expanded since colonial times as their competitors, wolves, were eliminated, but their range has also contracted in areas where they are in competition with coyotes. Red foxes prey on voles, rabbits, hares, and other small mammals, and also eat birds, fruits, and invertebrates even beetles and earthworms. A male female pair typically inhabits a territory, and older, usually female, siblings help care for the younger offspring by bringing them food. Red foxes are among the main carriers and victims of rabies.

Dens - Red foxes may dig their own den; more often they use an abandoned woodchuck (Marmota spp.) or American badger (Taxidea taxus) burrow. Dens are prepared in late winter at which time the female restricts her activities to the vicinity of the den site. There is a preference for loose soils on well-drained sites near or within vegetative cover. The same den may be used for many generations, with burrows being added each year. Most dens have at least two openings. Foraging cover - Red foxes often hunt in open grassy areas, especially along streams

This family of Red Foxes live in an abandon topsoil mount in the middle of a Canadian Forces Army Base (GFB Gagetown). The female fox has had two litters at this same location over the past two years. This year's litter is 5 pups.