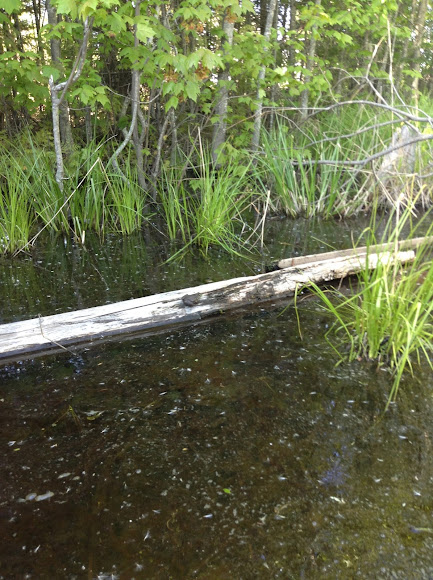 This species is a mid-sized true frog. Adult green frogs range from 5–10 cm (2.0–3.9 in) in body length (snout to vent, excluding the hind legs). The typical body weight of this species is from 28 to 85 g (0.99 to 3.0 oz).[5][6] The sexes are sexually dimorphic in a few ways: mature females are typically larger than males, the male tympanum is twice the diameter of the eye, whereas in females, the tympanum diameter is about the same as that of the eye, and males have bright yellow throats. The dorsolateral ridges, prominent, seam-like skin folds that run down the sides of the back, distinguish the green frog from the bullfrog, which entirely lacks them.

Green frogs live wherever shallow freshwater ponds, road-side ditches, lakes, swamps, streams, and brooks are found. Most often seen resting along the shore, they leap into the water when approached. By inhabiting an ecotone, in this case the terrestrial and aquatic habitat boundary, green frogs (and other aquatic ranid frogs), by employing a simple leap, leave behind their many and faster terrestrial enemies that cannot similarly cross that boundary.

I found the green frog in a ditch, near my house sitting on a log