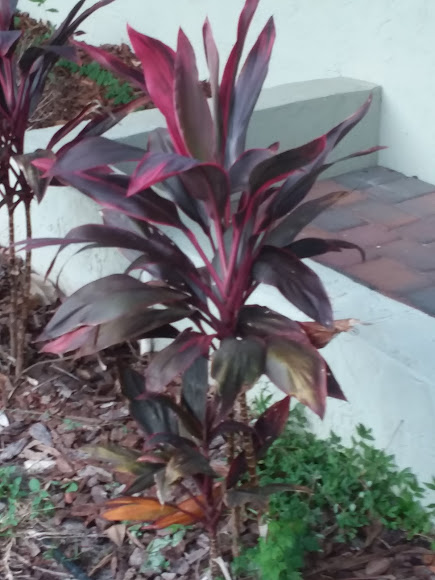 A ti plant growing in my aunt's private garden in Orlando, Florida. These are actually really cool plants. Ti has many uses but it is most notable as one of the most important plants related to the indigenous animist religions of Austronesians. It is very widely regarded as having mystical or spiritual powers in various Austronesian (as well as Papuan) cultures. Among a lot of ethnic groups in Austronesia it is regarded as sacred. Common features include the belief that they can hold souls and thus are useful in healing "soul loss" illnesses and in exorcising against malevolent spirits, their use in ritual attire and ornamentation, and their use as boundary markers. Red and green cultivars also commonly represented dualistic aspects of culture and religion and are used differently in rituals. Red ti plants commonly symbolize blood, war, and the ties between the living and the dead; while green ti plants commonly symbolize peace and healing. They are also widely used for traditional medicine, dye, and ornamentation throughout Austronesia and New Guinea. They're also the plant used to make traditional hula skirts and bags for spiritual offerings in Hawaii. And to top it all off, it's a member of the Asparagus group!

Original habitat unknown, but cultivated worldwide and is believed to have originated in the region from Bangladesh, to Mainland Southeast Asia, South China, Taiwan, Island Southeast Asia, New Guinea, and Northern Australia. Carried from Austronesian peoples, it has reached New Zealand, Hawaii, and the Easter Islands.