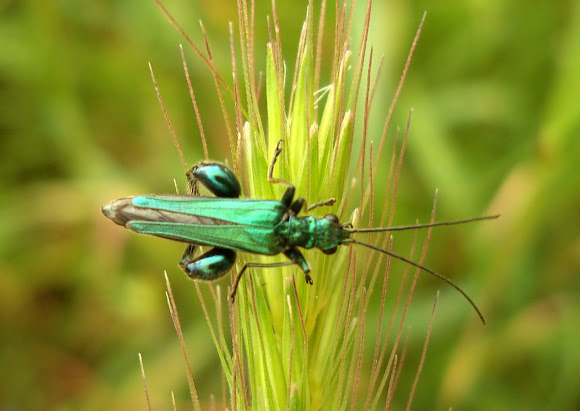 The male of Oedemera nobilis, as in most Oedemera species, possesses the hind femora very swollen, whereas in female the femora are thin; the elytra are strongly narrowed towards the apexes, not hiding the membranous hind wings. It is bright green, frequently with a golden or coppery shine; some individuals are blue or violaceous. It can only be confused with Oedemera flavipes (which does not live in England), from which it differs by its color, as well as by the long white pubescence on the head, pronotum and hind tibiae of males.

Western and southern Europe, from the Iberian Peninsula to Greece; it is absolutely common in Mediterranean countries and penetrates in Middle Europe to southern England and middle Germany; it reaches Denmark, where it is rare and sporadic. It is also recorded from the Magreb. It is absent from alpine countries and Eastern Europe. In England, it is presently in a markedly expansive and consolidational phase, which commenced during 1995. Oedemera nobilis is abundant in spring on several flower species; the males are very conspicuous by their swollen femora and bright green colour. It feeds on pollen and nectar of Asteraceae, Cyperaceae, Convolvulaceae, Cruciferae, Dipsacaceae, Scrophulariaceae, Poacea, Papaveraceae, Plantaginaceae, Rosaceae, Rubiaceae and Apiaceae.

What a beautiful beetle. Lovely spotting.