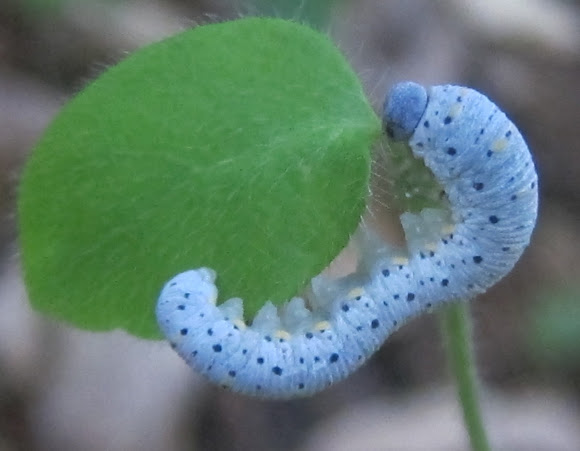 The Tenthredinidae are the largest family of sawflies, with well over 6000 species worldwide. Larvae are typically herbivores and feed on the foliage of trees and shrubs, with occasional exceptions that are leaf miners, stem borers, or gall makers. The larvae of externally feeding species resemble small caterpillars. They go through complete metamorphosis. The family has no easily seen diagnostic features, though the combination of five to 9 antennal flagellomeres plus a clear separation of the first abdominal tergum from the metapleuron can reliably separate them. These sawflies are often black or brown, and from 3-20 mm long. Like other sawflies, they lack the slender "wasp-waist", or petiole, between the thorax and abdomen, characteristic of many hymenopterans . The mesosoma (or thorax) and the metasoma (abdomen) are instead broadly joined. The Tenthredinidae are also often somewhat dorsoventrally flattened, which will distinguish them at least from the slender cephids (which, together with the common sawflies, comprise many of the Nearctic species of Symphyta). Females use their saw-like ovipositors to cut slits through barks of twigs, into which translucent eggs are wedged, which damages the trees. They are common in meadows, and in forest glades near rapid streams. Adults eat little, while larvae feed on foliage of streamside trees and shrubs, especially willow. Wikipedia

I'm not certain jones4, but I believe they do come in different colors.

This reminds me of a sawfly larva. Check into that if you don't get any better leads.

Thanks Yuko and Noel!

Wow! This is probably the prettiest caterpillar I've seen! What beautiful blue color and pattern!