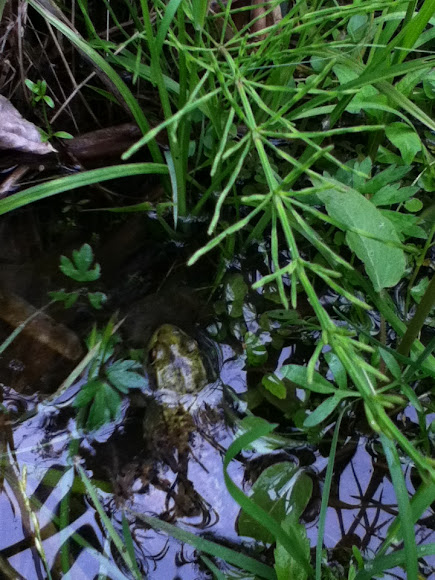 The Green Frog is a large, true frog with large, distinct tympanum and prominent dorsolateral ridges. It may be green, bronze or brown, or a combination but is typically green on the upper lip. The belly is white with darker lines or spots. There may be some irregular spotting on the back. It is distinguished from other frogs in that the dorsolateral ridges run only partway down the back and do not reach the groin. The hind legs have dark bars. Males have a bright yellow throat. Maximum adult size is 10 cm. Call: The call of the Green Frog is a deep twangy "gung" like a loose banjo string. It is similar to that of the Mink Frog, but more twangy and not repeated in rapid groups. Confusing Species: Bullfrogs are superficially similar although they lack dorsolateral ridges and are much larger as adults. Mink Frogs may also be confused with Green Frogs although the former has a yellowish belly, a musky odour and eyes slightly upturned. Mink Frogs also do not have bars on the hind legs. Distribution: The Green Frog is native to Manitoba, Ontario, Québec, New Brunswick, Nova Scotia and Prince Edward Island. It has been introduced to Newfoundland and British Columbia. It is widely distributed in the eastern half of the United States. New Brunswick, Newfoundland, Nova Scotia, Ontario, Prince Edward Island, Quebec

Green Frogs are most commonly found in or near shallow, permanent water such as springs, swamps, brooks and pond and lake edges

They eat other insects and they are very aquatic. Green frogs hibernate under water.