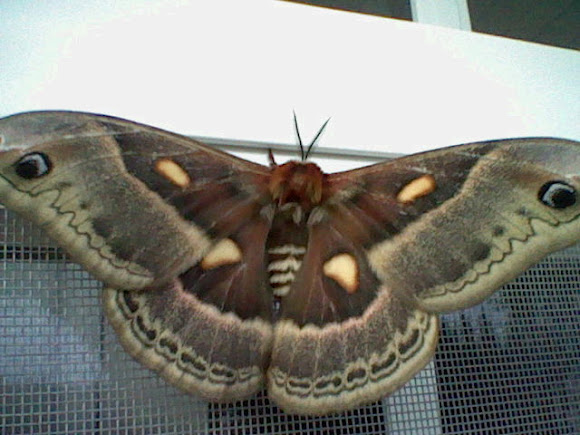 The Cecropia moth (Hyalophora cecropia) is North America's largest native moth. Females, which are larger than males, have wingspans recorded at up to 16 cm. Cecropia moths belong to the Saturniidae, or giant silk moth family. They live in eastern North American forests as far west as the Rocky Mountains. The larvae of these moths are most commonly found on Ash-leaf Maple (Acer negundo) and Sugar Maple (A. saccharinum) trees, but also feed on wild cherries and plums (Prunus), apples (Malus), alder and birch (Betulaceae), dogwoods (Cornus), and willows (Salix). Caterpillars feed together as young instar siblings, but become solitary as they mature. When full grown, they spin a silk cocoon, which they attach to a branch of their host plant, and overwinter as a pupa within. Adult moths emerge in the spring. Adults have no mouthparts and do not feed, living only long enough to mate and lay eggs.

They live in eastern North American forests as far west as the Rocky Mountains.

Jacob is correct. This one should be changed to Hyalphora columbia columbia. It is a female. The males are seldom see as they only fly at dawn.
Bill Oehlke

The subspecies H. columbia columbia is the only subspecies found in eastern North America. http://bugguide.net/node/view/523609/bgp...